Flip-Flop Fauci: Trump Mocks Fauci for Being ‘Wrong on Almost Every Issue’ 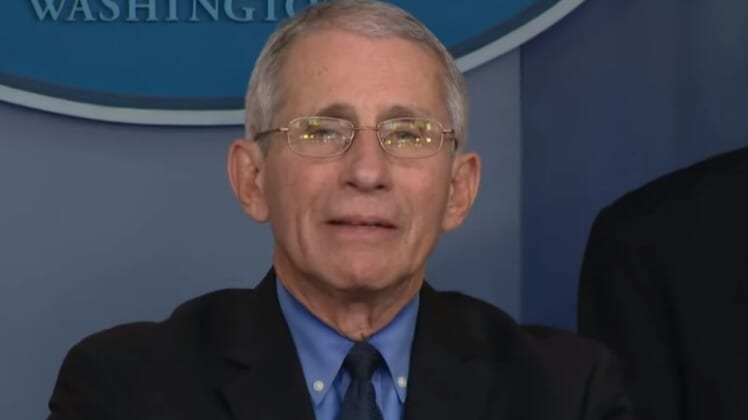 “Dr. Fauci, who I actually got along with. He’s a nice guy, he’s a great promoter, you know? Not a great doctor, but he’s a hell of a promoter,” Trump told the audience. “He likes television more than any politician in this room and they like television. But he’s been wrong on almost every issue.”

Trump mocked Fauci’s flip-flop on the science of mask-wearing.

“Fauci said, powerfully at the beginning, ‘No masks.’ Do you remember that? ‘No, masks don’t work.’ And then he went to masks, and then he became a radical masker,” Trump joked. “If you have three, if you have four [masks], get a pair of goggles ideally, and let’s wear them for another five or six years.”

Trump took credit for saving “thousands and thousands of lives” after closing the U.S. border, a decision that was condemned by Fauci: “Generally speaking, I went the opposite direction of what Dr. Fauci was saying.”

National radio host and best-selling author Todd Starnes double-downed on Fauci’s flip-flops after unearthed emails reveal Fauci knew the virus had possibly been “engineered” in Wuhan, while publicly downplaying the notion of the virus being created in a lab.

“Based on all the new evidence unearthed in Fauci’s emails — it makes you wonder if the shutdowns were more about trying to kill the Trump presidency than stopping the China Virus.”