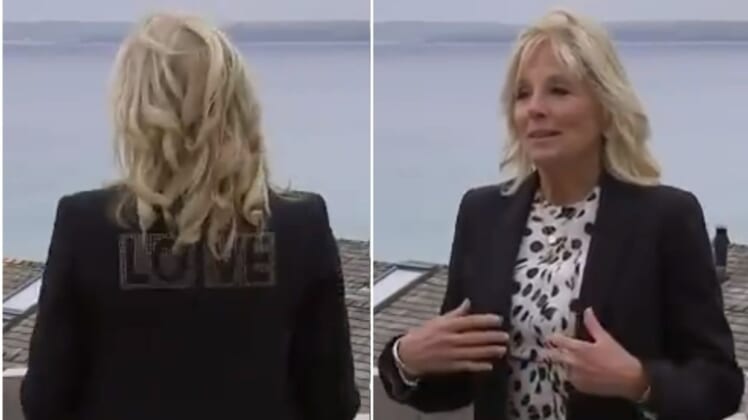 The mainstream media is tripping over themselves to compliment first lady Dr. Jill Biden’s “LOVE” jacket on President Biden’s trip to the UK.

A reporter asked Mrs. Biden about her jacket, which the media is calling a positive contrast to former first lady Melania Trump.

“Can you explain the message on the back of your jacket?” the journalist asked.

“Oh, the love?” Mrs. Biden asked before spinning around to show the back of the jacket.

“I think that we’re bringing love from America,” she said, before adding she wants global unity and claimed her husband is “overprepared” for the G7 summit.

WATCH THE FULL VIDEO OF JILL BIDEN TALKING ABOUT HER ‘LOVE’ JACKET BELOW:

Mrs. Trump wore a jacket with “Really Don’t Care Do U?” on the back, which she said was directed at the media, which reported it was directed at illegal alien children and the American people.

“It was for the people and for the left-wing media who are criticizing me,” Trump explained in 2018. “I want to show them I don’t care. You could criticize whatever you want to say. But it will not stop me to do what I feel is right.”

She added: “I often asking myself, if I had not worn that jacket, if I will have so much media coverage. I would prefer they would focus on what I do and on my initiatives than what I wear.”