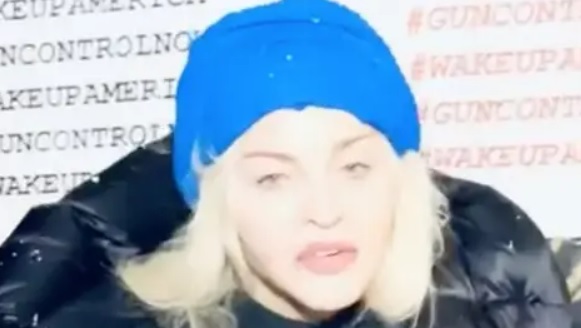 Madonna touted a “new vaccination” over the weekend that “should be mandatory” for all citizens.

The “Material Girl” singer is pushing gun control, something she’s done before, in support of the far-left group, Everytown.

“Wake up motherf***ers,” Madonna says at the beginning of the short video posted on Instagram.

She’s seen wearing a mask, but not a China Virus mask putting up #WakeUpAmerica and #GunControlNow posters.

“So what’s the vaccine for gun control — a bullet in the arm,” asked nationally-syndicated talk show host Todd Starnes.

The controversial 62-year-old celebrity responded to criticism of her anti-Second Amendment stance on Instagram.

“B**h I don’t have security or armed guards around me,” the “Queen of Pop” wrote. “The only criminals I see right now are the police who are paid to protect the people, but the police are protected and the criminal justice system is a joke because there is no justice if you are a person of color.”