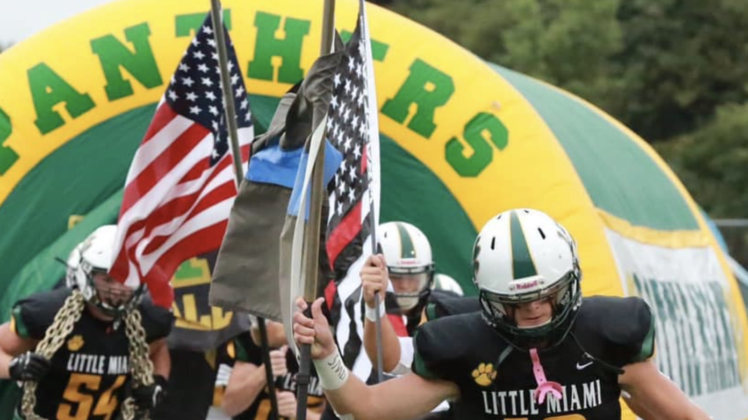 Todd Starnes, the host of the “Todd Starnes Show,” announced on Tuesday that the suspensions handed down to two football players at Ohio’s Little Miami High School were rescinded and credited his audience for its role in defending the students.

ToddStarnes.com reported last night that two football players at the school were warned by administrators before a game on Sept. 11 that they would be punished if they ran out to the field carrying flags honoring police, firefighters and first responders.

Jarad Bentley and Brady Williams disregarded the warning and both charged onto the field anyway carrying the “thin blue line” flag and a “thin red line” banner. Starnes called it on his show a “truly American moment.”

Bentley’s father is a firefighter and Williams’ dad is a police officer in Morrow, Ohio. The boys said they wanted to honor those lost in the terror attacks.

But school officials said that the boys were not given permission and the Little Miami Local School Board said in a statement that administrators “must act when students break the rules, and these students were suspended from practice while the incident was investigated.” The board later ruled that there were no political motivations but said the students were still in the wrong for disobeying the school officials.

TODD STARNES: GROWN ADULTS HAVE NO BUSINESS HAVING SEX WITH 14-YEAR-OLD BOYS– GAY OR STRAIGHT

Starnes took to Twitter after his live show to say that the school district was inundated with phone calls from his listeners who were very angry at how the boys were treated. He said that the response was an example of the power that conservatives have when they come together.

“Can we just be real for a minute,’ Starnes said. “If those boys had gone out there and had desecrated the American flag; if they had taken a knee and disrespected Old Glory, you better believe that the school district would have stood alongside those kids. I have no doubt about it. So it’s a double standard and we’ve got to call them out on it.”

Ralph, a caller into the program from Chicago who said he is a former police officer, said the “thin blue line” flags were created to honor the country’s fallen officers and goes back to the 1950s. He said it was wrong to punish the boys for making the statement because “every single athlete is doing it now, just look at the back of their jerseys.”

“They’re doing it every single day on every single sport, which I refuse, ever, to turn on any sporting event in my house because of that reason. If you’re going to stand up for something, stand up for people.”

Starnes said the boys were “right and also wrong” because they did disobey administrators. But he said the boys showed that they were raised the right way and knew they were going to be punished but accepted the penalty. He said these young men were willing to sacrifice in order to stand up for what they believed.