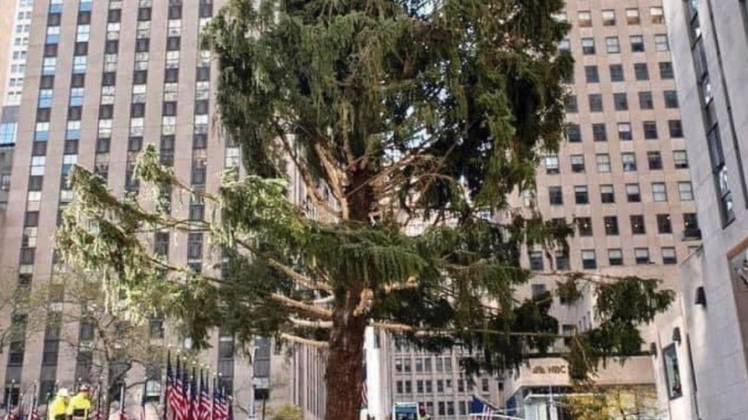 We’ll have a Blue Christmas at the Rockefeller Center Christmas Tree lighting this year…NYPD blue that is.

Videos emerged online that showed the great lengths New York City will go in its effort to prevent crowds from forming to catch a glimpse of the annual event that warms the hearts of even the most hardened New Yorkers.

City cops put up barriers and lined up buses to block the view of the tree, which promptly led to crowds forming behind the barriers.

“I wish the city organized this better,” Angel Caceres, who is visiting from Uruguay, told the New York Post. “I’m standing in the middle of a mob. Why can’t I be close to the tree?”

Breitbart reported that the videos were first posted on FreedomNews.TV, and some show attendees angling themselves to try and take photos of the tree in the small cracks between these buses.

“This year has been a downer,” Abel Fernandez, one of the people who tried to catch a glimpse of the tree, told the New York Post. “It would have been amazing and nice if the tree lighting was more festive.”

The country is entering the holiday season with some grim news on the coronavirus outbreak. Cities have reintroduced economy-killing measures in hopes of slowing the spread, but nationwide hospitalizations for the virus reached 100,000, and 2,760 people died on Wednesday. New York City reported a positivity rate of 4.8% over the past seven days, which is just shy of its peak in May.

“We’re very, very worried about this uptick in cases,” de Blasio said, according to the Post. “There’s a lot we need to do to address it.”

Todd Starnes, the host of the “Todd Starnes Show,” has said that there is an effort to cancel Christmas. He said that riots and protests are permitted in major cities, but an outdoor event like a tree lighting is banned.

Since the beginning of the outbreak, there seemed to be an underlying sense that if we somehow made it to the end of the year, things would return to normal. There was even hope that the disease would burn itself out. But that is a distant memory, and health officials are pinning their hopes on the effectiveness of vaccines that could be approved in the U.S. by mid-December.

The Post reported that last year there were hundreds of skaters on the famed ice rink below the tree and a large crowd to help with the countdown. But this year it’s akin to a ghost town under the tree.