“Animals That Must Be Hit Hard.” Trump Condemns Ambush of Two LA Deputies 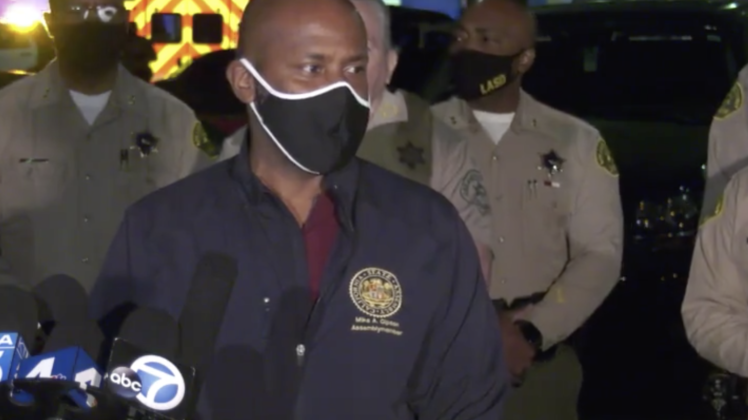 Two Los Angeles County Sheriff’s Department deputies are “fighting for their lives” after they were shot in their patrol car in an ambush attack in Compton.

It was an unprovoked and cowardly act, law enforcement sources said.

“Animals that must be hit hard,” President Trump tweeted just a few hours after the execution-style attack. “If they die, fast trial death penalty for the killer. Only way to stop this!”

“This cold-blooded shooting is unconscionable and the perpetrator must be brought to justice,” the former vice president wrote on Twitter. “Violence of any kind is wrong; those who commit it should be caught and punished.”

Update: The gunman walked up on the deputies and opened fire without warning or provocation. pic.twitter.com/cBQjyKkoxJ

The incident happened Saturday at the Metro Blue Line station at Willowbrook Avenue and Compton Boulevard around 7 p.m. The location is a short distance from the Compton sheriff’s station, the ABC television affiliate reported.

“One male deputy and one female deputy were ambushed as they sat in their patrol vehicle,” the department tweeted. “Both sustained multiple gunshot wounds and are in critical condition. They are both currently undergoing surgery. The suspect is still at large.”

They were rushed to a local hospital – where local thugs tried to block and then storm the emergency room. Click here for our reporting on that incident.

“They are both still fighting for their lives, so please keep them in your thoughts and prayers,” the sheriff’s department tweeted.

“On this the Lord’s day, please pray for the two LA County Police—and their families—shot in last night’s ambush,” he tweeted. “A cold-blooded execution attempt, followed by protestors blocking the hospital route… We need God’s wisdom and divine goodness in this country now more than ever.”