Louisville Mob to Police: ‘Get Ready to F***ing Die’ 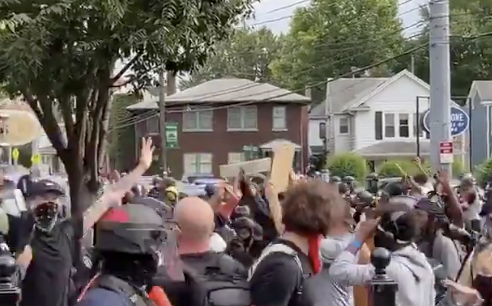 Videos emerged online showing a violent escalation in the streets of Louisville, Ky., Wednesday in the wake of the Breonna Taylor grand jury decision with at least one protester telling police, “Get ready to f***ing die.”

SEE IT: JOE BIDEN GETS RATTLED WHEN ASKED ABOUT HUNTER

Taylor was shot by police officers serving a no-knock warrant during a drug investigation in March, according to the Associated Press. The report said no drugs were found at the apartment and the suspect did not live there. The state Attorney General Daniel Cameron, who is black, said Taylor’s boyfriend shot at the officers and they were acting in self-defense. The cops also announced themselves before entering.

There were no charges for Taylor’s killing but one officer, Brett Hanksion, was charged with three counts of wanton endangerment.

Shortly after the announcement, protesters could be seen clashing with police in city streets and there were reports of crowd control munitions being deployed. A reporter from the Daily Caller reported that arrests have been made after a “crowd of hundreds confronted a police line in riot gear.”

Julio Rosas, another reporter with Town Hall, reported that some demonstrators received a mysterious delivery of supplies that were packed in a U-Haul truck that made the dump.

Rosas described the scene as chaotic. He said the BLM crowd was marching in the street until they were stopped by Louisville police in riot gear. The police moved in and rioters started to fight with the police and arrests have been made.”

Police warned protesters on a loudspeaker at one location and there was an unlawful assembly. Cops said demonstrators could be subject to arrest and chemical agents.

‘BURN IT DOWN’: ANGRY MOB TAKES TO THE STREET IN LOUISVILLE OVER BREONNA TAYLOR GRAND JURY INDICTMENT

Kyle Hooten, another reporter for the Daily Caller, pointed out that Twitter’s front page showed “No Officers Were Charged” and “Burn Louisville” were top trends in the U.S throughout the day.

One reporter also noted that there was an unusual interaction while protesters squared off with police. An ice cream truck blared its music during the confrontation and one protester screamed, “Read the room, ice cream man.”

Louisville Mayor Greg Fischer announced that “all of Jefferson County will be under a curfew starting at 9 p.m. Wednesday until 6:30 a.m. The curfew will last for 72 hours and have exemptions for work, medical aid and attending worship,” according to WDRB. The station also reported that Gov. Andy Beshear, D-Ky., also authorized the use of the Kentucky National Guard to protect city infrastructure.