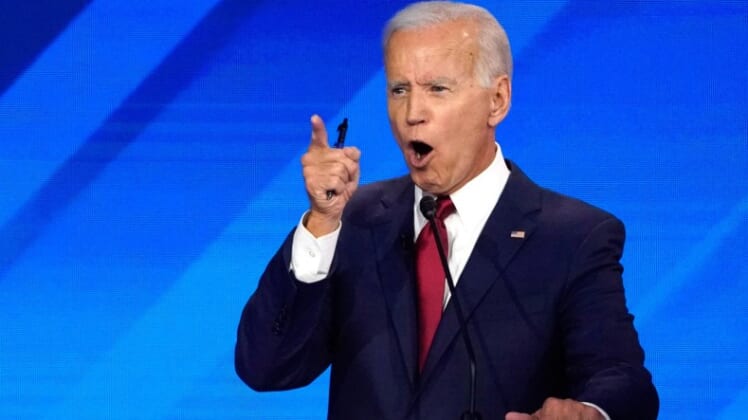 Joe Biden’s campaign was dealing with the fallout from the Senate GOP report released Wednesday that alleged a conflict of interest in the work that his son Hunter performed in Ukraine while his father served as the vice president in the Obama administration.

Biden lost his cool at an SEIU campaign stop when he was asked about the report. Donald Trump Jr. retweeted the reaction.

“It’s not a conflict of interest, there’s been no indication of any conflict of interest from Ukraine or anywhere else,” Biden said, apparently forgetting about the newly released report but growing more agitated. “I’m not going to respond to that. Let’s focus on the problem… focus on this man, [Trump] what he’s doing that no president has ever done. No president.”

Hunter has been something of an albatross for his campaign and a vulnerability. The Trump campaign has used Hunter as a frequent target in tweets from the president to his allies over his boad position on a Ukrainian natural-gas company in 2015.

‘BURN IT DOWN’: ANGRY MOB TAKES TO THE STREET IN LOUISVILLE OVER BREONNA TAYLOR GRAND JURY INDICTMENT

There is no evidence of wrongdoing by the Bidens and Hunter has denied using his father to aid the company.

Trump’s allies insist that Biden benefits from a friendly media and has not had to answer tough questions about his son Hunter’s role in Ukraine. But that will likely end soon. The first presidential debate is scheduled for Tuesday and the topic will likely be a key focal point for Trump.

The report prompted Democrats to accuse Republican Sen. Ron Johnson, the Homeland Security chairman, of being politically motivated. The Associated Press reported that Johnson said in August that the “American people deserve the truth.”

George Kent, a diplomat and witness at Trump’s impeachment proceedings, called Hunter’s presence on the Burisma board “very awkward for all US officials pushing an anti corruption agenda in Ukraine,” but said the embassy never made a decision where “we took the presence of a private citizen on the board into account.”