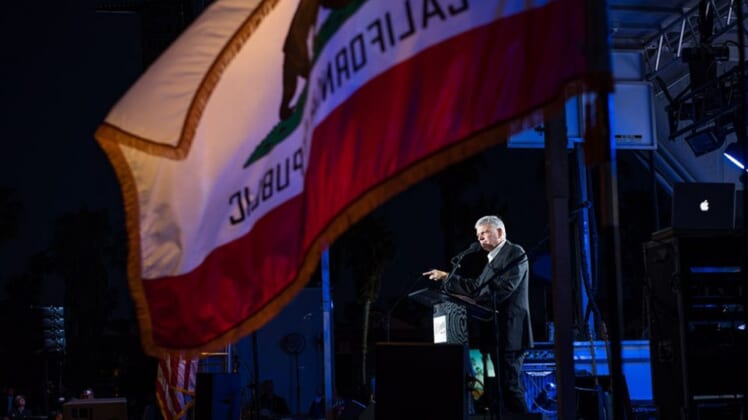 Franklin Graham is a man on a mission.

Graham has been on a 10-day bus tour across the state of California, holding massive evangelistic rallies from Pasadena to Redding to Berkeley. He’s going from city to city sharing the good news of Jesus Christ.

But Graham is also delivering another message – one meant for the faithful: vote.

“It’s important that Christians vote,” he said on my nationally-syndicated radio show.

“I’m not working with the Republican Party or the Democrat Party. I haven’t talked to anybody in the parties. We are staying out of the politics part of it. But I do want Christians to vote.”

That message has drawn concern from the Mainstream Media and the Fake News crowd. The New York Times published a lengthy report titled, “The Evangelical Fight to Win Back California.” They framed the “Decision America California Tour” as a political crusade.

Graham said he is not ashamed of his message – a call to spiritual arms for believers across the Golden State.

“California is sinking. People are leaving this state. The tax base is eroding. They are turning their once beautiful cities into these sanctuary cities which are just a little picture of hell,” he said. “Just go to San Francisco and take a look at this once beautiful city and see what’s happened to it.”

There’s no doubt that Conservatives and Christians have suffered under the oppressive leadership of California Democrats. A super-majority controls the state house and people of faith have been under a relentless assault.

“I want the churches to realize they don’t have to take this,” Graham said. “The churches can be the voice. They can be the ones who can turn this state back to God and turn it back into a beautiful state.”

It’s a message that Graham is taking to the national stage – to a country that he says is in trouble.

“The political swamp in Washington is a real swamp. That swam is not created just by Democrats. It’s Republicans and Democrats responsible for the swamp,” Graham said. “The only way we are going to get God’s voice in politics is if God’s people – who are called by His name – are willing to take a stand and let their voices be heard.”

So here is Franklin Graham’s call to arms for the American church: vote and run for office.