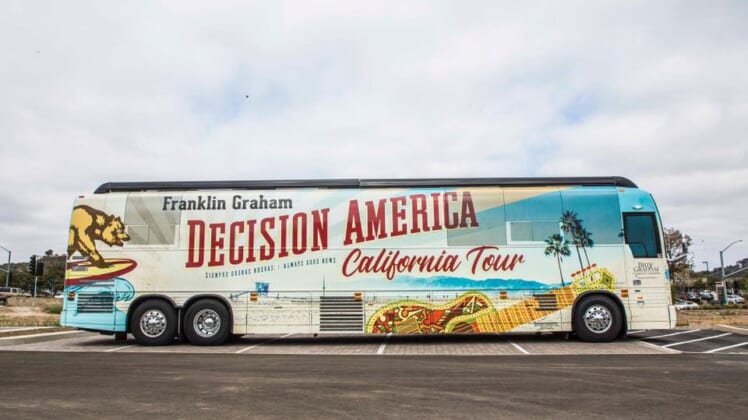 Franklin Graham is on a mission to urge California Christians to stand up and engage the political process.

“I don’t think that Christians should be silent,” Graham said during an interview on the Todd Starnes Radio Show.

The president of the Billy Graham Evangelistic Association and Samaritan’s Purse has been on a 10-day bus tour across the Golden State. Thousands have turned out to hear Graham’s message.

The New York Times, in a front page story, accused the famed evangelist of mixing politics with preaching.

“I’m sure the New York Times thinks this is political. They can think whatever they want to think,” Graham said on the nationally-syndicated radio show.

There is no doubt that Christians in California are facing difficult days. The state government is controlled by a super-majority of Democrats. And there have been outright attacks on people of faith.

In spite of the oppression, there is a spirit of excitement among conservatives. And there are some who predict Republicans could gain some ground in the midterm elections.

“California is sinking. People are leaving this state. The tax base is eroding. They are turning their once beautiful cities into these sanctuary cities which are just a little picture of hell,” Graham said.

He referenced the plight of citizens in San Francisco – where the streets are littered with needles and human waste.

“Take a look at this once beautiful city and see what’s happened to it,” Graham said.

I want the churches to realize they don’t have to take this. The churches can be the voice. They can be the ones who can turn this state back to God and turn it back into a beautiful state,” he said.

He said the only way to turn around the state of California is for the church to take a stand.

“I want to wake the church up before it’s too late,” Graham said.