“In God We Trust” Removed From Classroom After Atheist Parent Complains 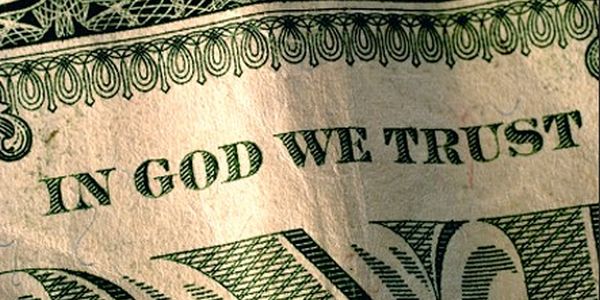 Among the items that were taken down at Roosevelt Elementary School – a cross, a poster listing “virtues and vices” and a poster that read, “In God We Trust” and a picture frame that included the American flag and the words “God Bless America.”

Yes, good readers – an atheist was apparently triggered by the words “God Bless America” and suffered a near-catastrophic microagression.

Television station WTMJ reports that parent Rob Moore was “infuriated” and “fuming” over the classroom decorations.

Moore is president of a Freedom From Religion Foundation chapter – a notorious group of atheists, agnostics and freethinkers that bully school districts. They are determined to eradicate Christianity from the public market place.

“There is an undeniable Christian theme in (the) classroom decorations and instruction,” Freedom From Religion Foundation attorney Ryan Jayne wrote in a letter to the school district.

“Religious classroom decorations violate this basic constitutional prohibition by creating the appearance that the District prefers religion over non religion, and Christianity over all other faiths,” the attorney wrote.

The atheists also took issue because there was a “Child’s Christian Bible” in the school library – “but no other religious texts.”

“Religion is a divisive force in public schools,” the attorney wrote.

The Kenosha Unified School District did not confirm whether the teacher removed the items that triggered the atheists.  They issued a statement saying the matter was under investigation.

If the phrase “In God We Trust” really triggers atheists, I can only imagine what sort of calamity might befall them at the Piggly Wiggly when they pull out a crisp dollar bill to pay for their kale chips and veggie burgers.

Perhaps they ought to switch to Bitcoin.

Why this Mom Loves March Madness