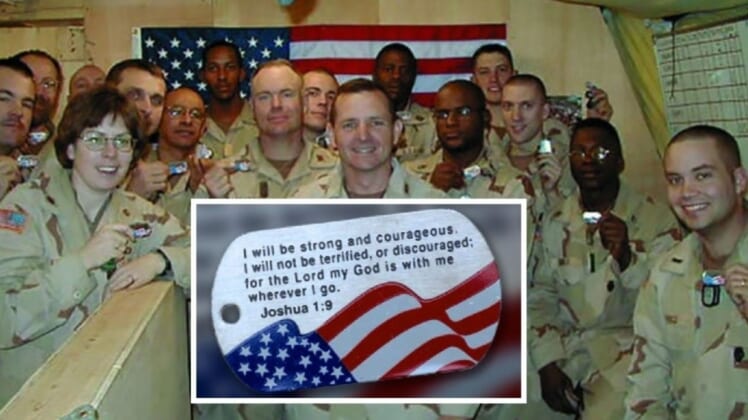 First Liberty Institute and the law firm Fish & Richardson filed a complaint Wednesday on behalf of Shields of Strength, which has been making military-themed dog tags with Bible verses and inspirational messages for over 20 years, at a district court in Texas.

Kenny and Tammie Vaughan started Shields in 1998 and have since sold or donated four million inspirational dog tags to servicemembers and their families, but in 2019, after Military Religious Freedom Foundation (MRFF) Founder and President Mikey Weinstein complained, the Department of Defense pulled licensing from Shields of Strength.

Berry called Weinstein a “bully” for the attack on the private Christian company.

“Now our troops and their loved ones can no longer have those Shields of Strength,” Berry told host Todd Starnes. “It’s outrageous. It defies logic, and it’s unconstitutional.”

Berry, a military veteran, said the troops prefer the customized tags but Vaughan can’t make them until the DOD rescinds its cease-and-desist letter.

“It’s just appalling and we’re so glad that you guys filed a lawsuit,” Starnes said.

Weinstein complained that the faith-based dog tag using the Army, Marine Corps, or Air Force emblem “poisons the constitutionally-mandated separation of Church and State.” Shields of Strength is seeking to reinstate the trademark license for the replica dog tags.

According to the lawsuit filed Wednesday, the DOD’s policy declaring that “DOD marks may not be licensed for any purpose intended to promote….religious beliefs” violates the Free Exercise Clause, the Establishment Clause, and the Free Speech Clause of the U.S. Constitution.