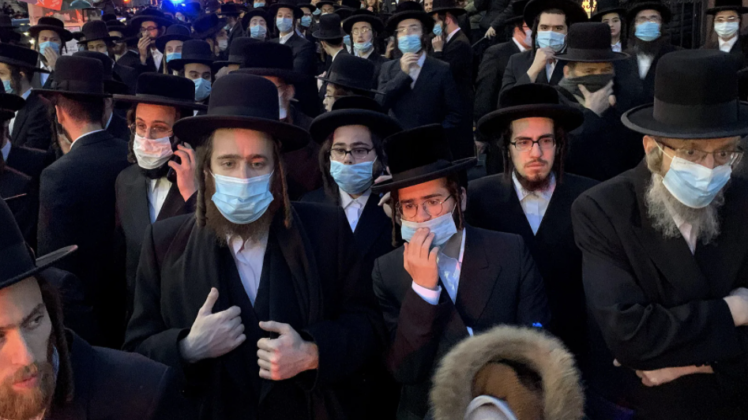 President Trump took to Twitter on Wednesday to call out what many detractors of New York City Mayor Bill de Blasio see as anti-Semitic behavior over the city’s partial coronavirus crackdown.

De Blasio, who was born Warren Wilhelm Jr., told reporters earlier this week that he respects the rights of peaceful protests, but he said the NYPD will “not tolerate” those who harm others, commit assaults, damage property and set fires.

The statement sounds reasonable. Any government that permits that kind of anarchy (like in Portland) cannot stand. But de Blasio took a different approach when the city saw looting and violence during its George Floyd protests.  He tried to focus on the peaceful protesters and brushed off some who “came with an agenda.” He blamed the NYPD at the time for being over-aggressive and not “reflecting the philosophy of this city.”

(His daughter, Chiara, 25, was taken into custody after police declared an unlawful assembly in Lower Manhattan, and de Blasio said he is “proud of her.”)

Criticism for de Blasio has been sharp, and these detractors say if protests under the guise of civil rights are praiseworthy, why are protests against coronavirus crackdowns and First Amendment rights inappropriate?

James Woods, the actor and vocal conservative, called de Blasio an “anti-Semite thug piece of sh–.” He tweeted that he never thought that’d he’d live to see the day in America where “Rounding up the Jews” is a legitimate concern.

Trump retweeted Woods’ post and said, “Wow, what does this grim picture remind you of? I am the only thing in the Radical Left’s way! VOTE.”

There have been conservative critics of the Black Lives Matter movement who say, at root, anti-Semitic.

Politifact reported back in August that hundreds of Jewish organizations support the movement, but quoted Todd Gutnik, a spokesman from the Anti-Defamation League, who said there are BLM supporters that have spread anti-Semitic rhetoric that “raises serious concerns.”

KERIK TO TODD STARNES: IF RUDY WAS MAYOR, PROTESTERS WOULD BE GONE IN AN HOUR

Gov. Andrew Cuomo, the New York Democrat, has also been accused of anti-Semitism and has been sued by an Orthodox Jewish group over the new restrictions after he announced the closure of non-essential businesses and schools in Brooklyn and Queens, the New York Post reported.

“Forty-eight hours before the onset of these holidays, Defendant Governor Cuomo issued an Executive Order that singles out and discriminates against all houses of worship— and synagogues in particular — by imposing occupancy and gathering restrictions that make it impossible for Orthodox Jews to comply with both their religious obligations and the Order,” the court paper charge read, according to the paper.