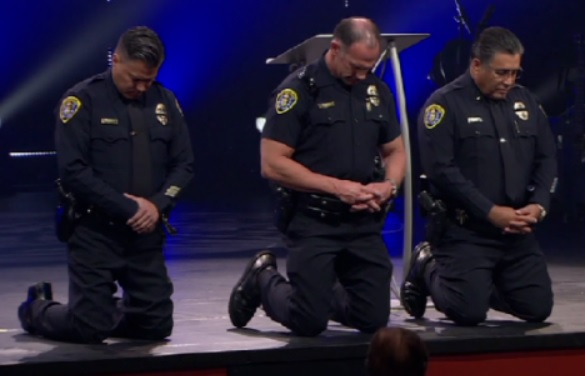 The California bill loosely defines “hate speech” in a way that can remove conservative or religious police officers from the force.

A new California bill proposes removing police officers from serving if they have used loosely defined “hate speech” or are in some way affiliated with a “hate group.”

The bill, AB 655, would mandate a background check for all officers who “exchanged racist and homophobic messages,” the Federalist reports.

Ahead of the April 6 vote, Pacific Justice Institute Senior Staff Attorney Matthew McReynolds slammed it as purposefully broad to allow Christians and conservatives to be labeled as “hateful” for opposing abortion or same-sex marriage.

The CLEAR Act defines “hate speech” as “as advocating or supporting the denial of constitutional rights of, the genocide of, or violence towards, any group of persons based upon race, ethnicity, nationality, religion, gender, gender identity, sexual orientation, or disability.”

The conservative attorney, in a letter to the Committee on Public Safety of the California State Assembly, also wondered how it would impact Muslims.

“Under the guise of addressing police gangs, the bill at the same time launches an inexplicable, unwarranted, and unprecedented attack on peaceable, conscientious officers who happen to hold conservative political and religious views,” Reynolds said.

“Indeed, this is one of the most undisguised and appalling attempts we have ever seen, in more than 20 years of monitoring such legislation, on the freedom of association and freedom to choose minority viewpoints,” he added.

“You’ve got to pay attention to this kind of nonsense,” he said Wednesday on the Todd Starnes Radio Show.