DUELING RALLIES: Trump Brings Down the House in Tampa versus Joe’s Snoozefest 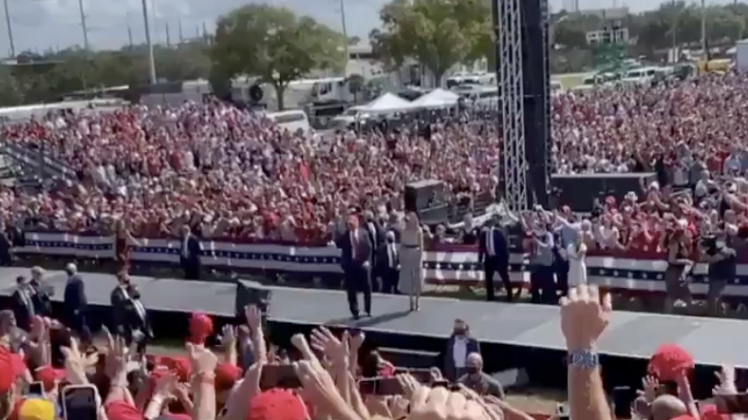 It was a tale of two rallies.

President Trump and Joe Biden came within miles of each other in Tampa, Fla., on Thursday but showed that they remain far apart in their approach to governing and how to best charge up their base days before the election.

THUGS BURN DOWN CHURCH IN PHILADELPHIA

The Trump crowd seemed to be enthused. Reports said that lines formed outside Raymond James Stadium at 1 a.m. on Thursday to catch a glimpse of the president at the rally, which was held inside a stadium parking lot.

TOSS YOUR COOKIES: GIRL SCOUTS ACB DISS IS UNCALLED FOR

Trump had something to cheer about. There was a 33.1% growth in GDP and jobless claims fell to the lowest level since March. Trump told the crowd that he would never close the country again due to the coronavirus and vowed to lead the way for the great American rebound.

“We will fight for American workers. We will defend our second amendment… support our police, protect our borders, defend school choice, ensure more products are stamped with made in the USA,” he sid, according to Bay News 9.

The Sun-Sentinel described the scene at the Biden rally, which was held in the parking lots at Broward College. The paper described a “socially distanced drive-in event” at the campus in Coconut Creek. The paper said “more than 100 cars, most with a couple of people, assembled in parking lots” masks were almost universal and the lectern was sanitized between speakers.”

Florida is seen as a critical state in the 2020 election and may decide the country’s next president.

Biden, once again, hinted at a national mask mandate and said Trump has been sowing discord and chaos in the country. He said that he is the candidate to bring the country together. The former vice president, who has been ensnared in the Hunter Biden scandal regarding alleged influence peddling, seems to be taking battleground states seriously. Democrats do not want to take anything for granted with 2016 still fresh on their minds.

It was unusual for two candidates to cross paths so close to the election.

One person on Twitter mentioned the excitement felt in the city, “I live in Tampa Bay and both Trump and sleepy Joe are holding rallys (sp) here today. Can hardly wait to see the Trump attendees compared with Biden’s puny assortment of staff, reporters, paid stand-in and family members. It’s going to be a riot! The funny kind, not the looting kind.”

The crowd was pumped to have @JoeBiden in Broward today! We helped rally #BidenHarris2020 supporters and Florida Democrats are energized & already voting in record numbers. We have Joe to thank for that! But we need to keep pushing to win big in FL and put Joe Biden over the top! pic.twitter.com/voTULfjUJw