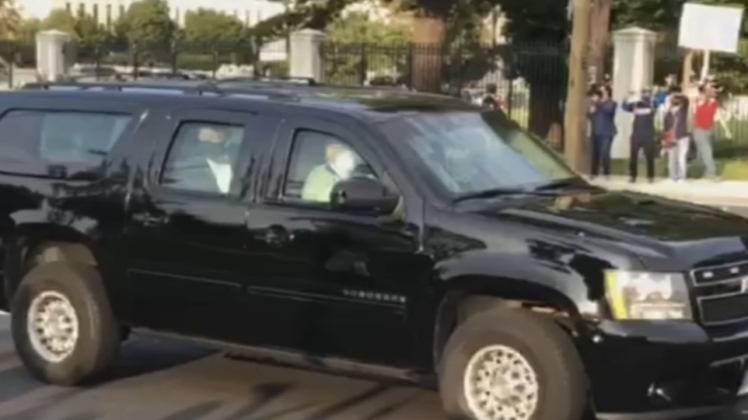 ‘I HOPE HE DIES FROM IT’: SCHOOL BOARD MEMBER RESIGNS AFTER ANTI-TRUMP COMMENT

The media’s theme since Trump’s announcement that he tested positive for coronavirus has been in lockstep. Reporters blame the president for what they’ve determined to be a reckless approach to the virus. Trump’s decision to drive in the famous presidential limo with a few agents inside was seen by Trump-haters to be the height of callousness.

Yashar Ali, a journalist and frequent Twitter user, posted what he identified as a text message from an agent excoriating the president over the decision to take the drive.

“I am beside myself. He is willfully disregarding the health and safety of the agents around him. They have no choice as they will carry out their mission but if this is not a clear indication that he could give two sh**s about their health safety then I don’t know what it is,” the agent reportedly wrote. “I remember a time when we used to judge protect is based on whether or not they traveled over the holidays; thus impacting the family lives of the agents. Now moving forward I guess the litmus test is whether or not the president will kill me.”

Bongino took issue with the tweet and said he is still in contact with “hundreds of my former colleagues in the Secret Service and this is BULLSH**.”

PASTORS ARE ALLOWED TO ENDORSE CANDIDATES AND THEY SHOULD

“This “commentary” is from one agent (we all pretty much know who it is) who serves as a quote factory for negativity when they need to advance a narrative,” Bongino tweeted.

Judd Deere, the White House deputy press secretary, said in a statement “that appropriate precautions were taken in the execution of this movement to protect the President and all those supporting it, including PPE. The movement was cleared by the medical team as safe to do.”

Bongino said that he has coordinated security for former President Obama inside a war zone in Afghanistan, and told the Washington Examiner that he doesn’t “recall one story about our safety then.”

“Since the lib media is so “concerned” about the HEROES in the Secret Service, I assume we’ll see a story soon about the former Presidents (i.e. Obama) forfeiting their protective details so the USSS can reduce risk by staying home when they travel to hot spots around the world,” Bongino tweeted.