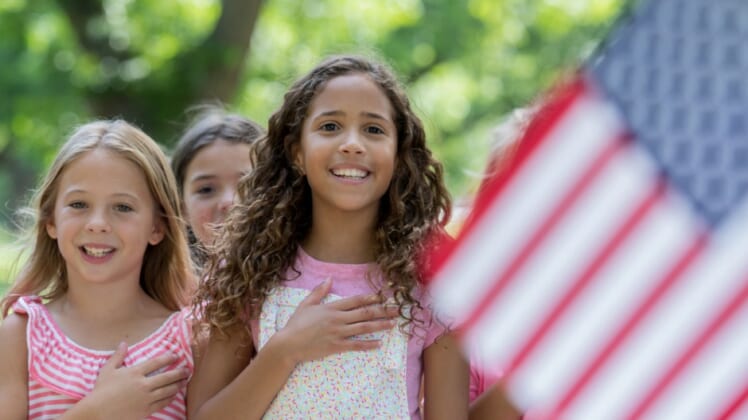 Patriotism is under assault in city halls and school classrooms and athletic stadiums across the fruited plain.

In chapter two of my forthcoming book, “Culture Jihad: How to Stop the Left From Killing a Nation,” I warn Americans about the stealth war being waged on our traditions and heritage.

That’s why so many lawmakers and educators have been triggered by the Pledge of Allegiance. The belief that we are one nation under God has caused an untold number of leftists to suffer microaggressions.

CLICK HERE TO PRE-ORDER A COPY OF TODD’S NEW BOOK, “CULTURE JIHAD: HOW TO STOP THE LEFT FROM KILLING A NATION.”

The latest incident occurred in Arcata, California where a lawmaker called for the eradication of the pledge of allegiance at city council meetings.

“I would love to get rid of the flag salute,” Paul Pitino said August 21 in remarks reported by the Lost Coast Outpost.

Pitino made national headlines in 2018 when he called for the removal of a statue honoring President William McKinley.

City leaders voted to remove the statue because they viewed McKinley’s annexation of tribal lands in the western U.S. and Hawaii as “racist toward indigenous people.”

“For me, it’s something that has been added in and we just — by rote — accepted that it’s something we do. And the necessity for it, to me, doesn’t exist outside of trying to promote adherence to the flag, which is starting to become a little archaic in my mind,” Pitino said, referring to the pledge. “I don’t do it because it gets close to being religion in a way, or a belief mechanism if you want to call it that, and I don’t think it has any place in our council meetings.”

The city council did not take immediate action on Pitino’s request, but given their aversion to patriotism, I would not be surprised if the pledge got the heave-ho.

Meanwhile, in Hammond, Indiana a member of the South Shore Convention and Visitor’s Authority caused a bit of a tiff when he refused to recite the pledge because of its alleged white nationalist origins.

“An important tenant in the way I live my life is introspection, self-criticism, and a historical perspective,” Raymundo Garcia told newspaper columnist Jerry Davich. “We need to remind people of the hypocrisy, the true racial origin and the historical context in which the Pledge originated.”

Sadly, we live in a nation where people who disrespect the flag and eschew patriotism are celebrated. The last time I checked Nike was not giving out endorsement deals to people who wrap themselves in the red, white and blue.

And hell hath no fury like a school district that catches a teacher trying to instill American pride into the hearts and minds of students.

Just ask Daniel Goodman, a former school teacher in Florida who was indefinitely removed from the classroom because he dared to lecture students who refused to stand for the pledge.

I’ve often wondered what President Reagan would say about this national effort to marginalize this great country. In 1985 he called on Americans to honor the flag and recite the pledge.

“In honoring our flag, we honor the American men and women who have courageously fought and died for it over the last 200 years—patriots who set an ideal above any consideration of self and who suffered for it the greatest hardships. Our flag flies free today because of their sacrifice,” Reagan said.

He went on to say that every time we place our hand over our heart and pledge allegiance to the flag, “we’ll be reminded that our most precious inheritance is freedom and that history has bestowed on our nation the unique responsibility for its protection.”

Unfortunately, we live in a day when the leftists not only want us to forget the past, they want to destroy the past.