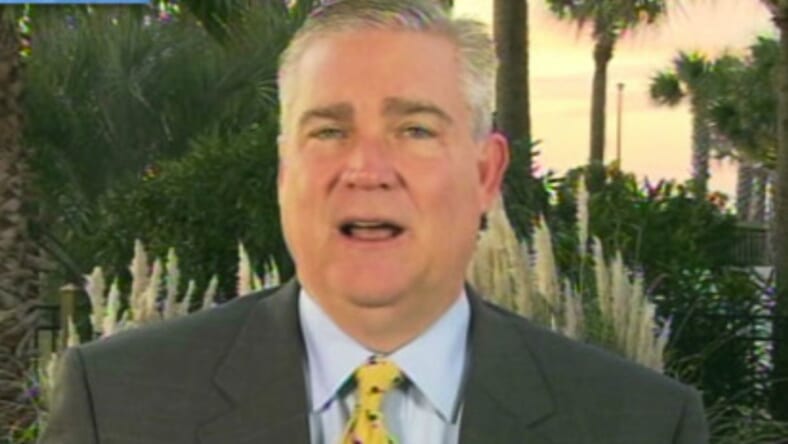 Chad Connelly, the founder of Faith Wins, predicted on the Todd Starnes Show that there will be a Republican tsunami at the ballot box on November 8.

“I have never seen people coming out of the woodwork to say, what can I do on a bunch of levels?” Connelly told Starnes.

Trump: ‘I Will Probably Have to Do it Again’

One of the examples Connelly gave was out of Wisconsin, in which 100% of the poll watchers needed for the election have been filled.

“We were recruiting Christian poll watchers from churches in eight states. I got news yesterday, Todd, that actually the state of Wisconsin and the state of Nevada and to the point where nobody even knows this has ever happened, 100% of the poll watcher positions are filled. If that’s not a testimony to how people are coming out, I don’t know what is because we begged people to do that for years. And the folks in Wisconsin think that less than 10% of those spots were filled last time. And to think that 100% of that number is filled now is astounding to me.”

LISTEN TO THE FULL INTERVIEW BELOW:

The following is a rush transcript from the Todd Starnes Show which airs daily from noon – 3:00 p.m. EST.

CHAD CONNELLY: [00:41:33] Hey, my brother. Man, you are so right. There’s a tsunami coming. We were in Nevada last night. I just stepped off the red-eye not long ago. And I’ll tell you, Todd, as a zombie as you feel after a red-eye, I am fired up for the nation. We were actually in Southern California over the weekend, then went to Nevada. I’ll be in Arizona tomorrow. I’ll get back on a flight tomorrow to go to Arizona for three days and we’ll wrap up in Texas. We’re trying to hit everywhere we can just to maximize the Christian vote in every election, brother. [00:42:05][31.9]

TODD STARNES: [00:42:06] And that’s been a big challenge for four years. And I don’t think anyone has been as effective. You know, going back to Jerry Falwell senior and of course, the great work Ralph Reed did back during the Christian Coalition days. Now, the faith and freedom, folks. But you’re out there boots on the ground, Chad. And I’m wondering what you are seeing among Christian voters. Are we getting are we going to get them out to vote on Election Day? [00:42:32][26.0]

CHAD CONNELLY: [00:42:33] Man Todd. As you said, we get to stand on the shoulders of giants who set a pattern force. And I’m just trying to duplicate and maybe enhance that. And yes, I’ve done this an awfully long time. And I have never seen people coming out of the woodwork to say, what can I do on a bunch of levels? And I can tell you stories all day long about this. We had 384 in a church last night in northern Las Vegas. We had lunch yesterday with 60-something people. Over half were pastors. That was lunch in another part of Vegas. We were in Pahrump, Nevada, the night before with 125. We were in San Diego the night before with, I don’t know, 600, 650 people there. You know, I’ve spent my whole adult career in politics trying to get people to be motivated, just like you said. It’s a difficult task. People are coming to us and saying, what can I do? You probably know, I think I told the story the last time I was on the show. We were recruiting Christian poll watchers from churches in eight states. I got news yesterday, Todd, that actually the state of Wisconsin and the state of Nevada and to the point where nobody even knows this has ever happened, 100% of the poll watcher positions are filled. If that’s not a testimony to how people are coming out, I don’t know what is because we begged people to do that for years. And the folks in Wisconsin think that less than 10% of those spots were filled last time and certainly a very similar number for Nevada. And to think that 100% of that number is filled now is astounding to me. [00:44:10][97.2]

TODD STARNES: [00:44:11] What I find astounding is that you are in places like California and Arizona and Nevada. That tells us that those typically Democrat-controlled states are up for grabs and that there’s a very good chance that the Republicans will be able to win. I’m looking at the latest polling data coming out of Nevada. For example, the Adam Laxalt race against Cortez Mastro, and he is now leading. And that was not expected to happen. So that was a seat the Democrats were expecting to hold on to without much struggle. And it looks like that may not be the case after all. [00:44:43][31.4]

CHAD CONNELLY: [00:44:51] Well, I think it’s really happening nationwide. Well, David Barton and I are doing this barnstorming tour. We’re actually going to get in 132 cities in 24 states between February and November 8th. And I guess we’re doing about getting in there with about 75 of those that happened between September 1st and the election. So we’ve had a really good view. I was in Wisconsin a couple of weeks ago, Todd. We were in the inner city of Baltimore with African-American pastors three weeks ago, the inner city of Philadelphia, with a real mixed-ethnicity group of pastors and leaders there, just sick of the crime. They’re sick of the lies. They’re sick of the hypocrisy from the left. They’re sick of being told we’re taking care of you. In Wisconsin, you’ll love this story. A pastor comes up to me he was saved late in life. Oh, he’s probably mid-forties. He’s had this church for I think he told me for 12 or 14 years, about 1200 people come to church, and my pastor in the state had asked him to use it as a venue. We had 144 people in a room. 81 were pastors from what my team told me. This pastor comes up and said, Chad, I’m letting you use the church because your buddy, your pastor here asked me, I love the guy, but I’m pretty skeptical about being involved as a pastor. I said pastor What do you mean? What are you skeptical about? He said just the whole political thing. I said, Do you think we as a group want you to be political? He said I guess so. And I said, We just want you to be biblical, brother. He said, okay. And he said, I said, I hope you can stick around to hear my talk. And then David Barton talks about American history and God’s role. He said, I really can’t. Well, Todd, I did my you know, I did my short video with Faith Wins. And here’s what we’re doing and probably 12 or 15 minutes. David talked for nearly an hour. The guy stood in there the whole time. He comes up to me afterward, Todd and I could tell the story from virtually every state, by the way. He grabs him by the arm and says, Chad, we want to be ground zero for everything you’re doing in the state of Wisconsin. It’s those kinds of things that are happening to watch the light bulbs go off in people’s heads. Yes, I need to be involved. Yes, it’s an obligation. It’s a stewardship responsibility on my part as a Christian. I cannot, NOT vote and tell other people what a big deal it is. [00:46:57][125.5]

TODD STARNES: [00:46:58] Chad Connelly from Faith Wins, the founder and CEO are on our Patriot Mobile Newsmaker Line. By the way, folks, some new polling data coming in from Politico and Cook Political, both moving the Arizona Senate race into the tossup category that had been leaning left for the democrats. Mark Kelly running in that race. Blake Masters. The question now, of course, will be whether or not Mitch McConnell will move more money for advertising into Arizona. Chad, you mentioned some of the big issues that are on the minds of Christian voters. I have to imagine religious liberty is a big issue. [00:47:38][39.8]

CHAD CONNELLY: [00:47:39] It’s a huge deal. Government overreach in regard to religious liberty. You know, all these blue states that shut down churches first, or forbid us to sing Christian songs, and yet the marijuana dispensaries and the liquor stores and the big box stores were open. And, you know, we get unfairly categorized as only caring about life and marriage. You know, that’s how the media frames us. I do interviews with, you know, the mainstream press just about everywhere we go. And I always try to correct them, that their premises are wrong. Christians are like everybody else. We care about these gas prices. You know, we’re supposed to feel good because only twice as much as they were when Biden came in office, as opposed to three times as much as they were when he first you know, stopped energy production. We’re supposed to not care about things like crime and a poor southern border and drugs coming across and human trafficking. All the things we see these people in churches are standing up saying, I’m sick of this. I got to be involved. I think the early voting in a state like Georgia that you look at those counties that are turning out, those are strong conservative counties that are over just blowing out of the water the projections of the early vote. And of course, that pretty much takes away Stacey Abrams’s whining about these new election integrity laws would suppress votes. Quite the contrary. People are coming out and saying, I care about my nation. I care about this kingdom of God’s kingdom on earth, and I’m going to do my part. [00:48:59][80.4]

CHAD CONNELLY: [00:49:09] So I’m home for about 20 hours. And then my wife and I are going to fly to Arizona. We speak in Arizona. I think we have five different meetings across the state of Arizona. We wanted to finish there and then we’re going to end up in Texas. So we’ve got a couple, three more states left. We’ve been trying to be nimble and be in places we’ve been at in New Hampshire last week. So Arizona and Texas are next. Brother, I appreciate what you’re doing. [00:49:31][22.1]

TODD STARNES: [00:49:41] All right Chad Connelly, a good friend of ours and a great American patriot out there on the campaign trail. And he’s trying to light a fire under all of you evangelical voters. And it’s interesting because all the evangelicals just went out to vote, then by golly, you would have Republican landslide wins in every single race. But for whatever reason, it’s just hard to get you to know, it’s hard to get the of the evangelicals, hard to get the Christians out to vote on Election Day. [00:50:11][29.7]