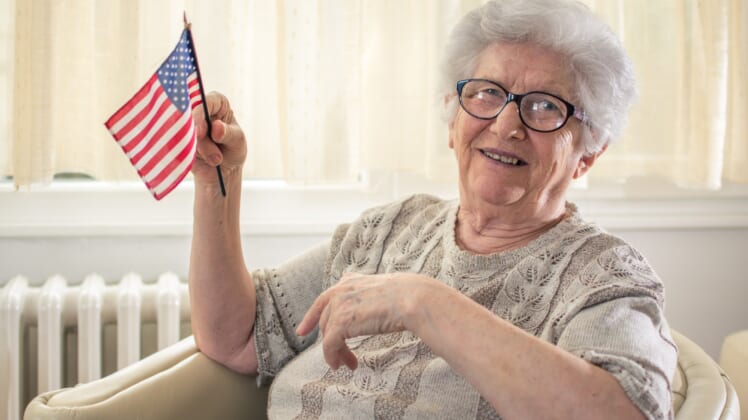 When a group of senior citizens in Washington State were told they could no longer pray or recite the pledge of allegiance at their community center, they reached out to the one organization they knew would help – the American Legion.

The board of directors at the Mullis Community Senior Center on San Juan Island decided to revise its lunchtime program by removing the traditional prayer and the recitation of the pledge.

The center’s executive committee blamed the prayer and the pledge for a decline in attendance, as I mentioned on the Todd Starnes Radio Show Podcast.

“We discovered that many of the incoming seniors were uncomfortable with an introductory ceremony where the Pledge of Allegiance and prayer were recited,” they wrote in a letter to the San Juan Islander.

The senior center went on to say they had a “duty to provide a safe and peaceful environment in our building and on our property, inclusive to all.”

In a separate posting on the center’s Facebook page, they explained a growing a patriotic divide between older seniors and younger seniors.

“We need to adjust to the changing lifestyles among younger seniors; they do not care for ceremony, they live busy lives compared to seniors in the past and are often working at least part-time,” they wrote. “We feel we cannot let habits of the past be the enemy of the future.”

Pledge and Prayer are Enemies of Future

So the folks in charge of the Mullis Community Senior Center seem to believe that offering Grace before a meal and reciting the pledge of allegiance is an enemy of the future?

I’m not terribly surprised by the center’s unpatriotic logic. There has been a concerted effort by the left to eradicate devotion to God and Country as I write in my upcoming book, “Culture Jihad: How to Stop the Left From Killing a Nation.”

American Legion Post 163 Commander David Holzer said they were more than happy to assist local senior citizens who wanted the pledge restored. But even the brave military veterans were not prepared for the community center’s open hostility toward patriots.

Radio station KIRO reports that American Legion members were threatened, harassed and kicked out of the building.

They also report that sheriff’s deputies escorted one veteran out of the building after he brought a flag onto the premises and recited the pledge.

Holzer tells the radio station that a staffer even compared reciting the pledge to Nazism.

“My response to her, besides a dumbfounded look, was, ‘They didn’t have a choice. In this country you do,” he said. “And you’re taking away everyone’s choice and right of saying the Pledge of Allegiance.”

In response to the outrage, the community center said they would restore the flag to its rightful place. They are also working on a place to reinstate the recitation of the pledge – a half hour before lunch is served.

First Liberty Institute, a law firm that handles religious liberty cases, tells the Todd Starnes Radio Show it should be permissible for senior citizens to not only pledge allegiance to the flag, but also pray to the Almighty.

“These senior citizens should be free to pray together before their meal,” senior counsel Roger Byron said. “The Supreme Court just last year said, ‘There can be no doubt that the First Amendment protects the right to pray. Prayer unquestionably constitutes the ‘exercise’ of religion.’”

First Liberty says they have been in contact with local seniors to advise them of their constitutional rights.

“The center needs to ensure that the religious liberty rights of the seniors are protected,” Byron said.

Ultimately, this is a fight about defending traditional American values, God and Country. And I suspect the fight is far from over.

But today we salute American Legion Post 163 and the brave silver-haired patriots on San Juan Island.