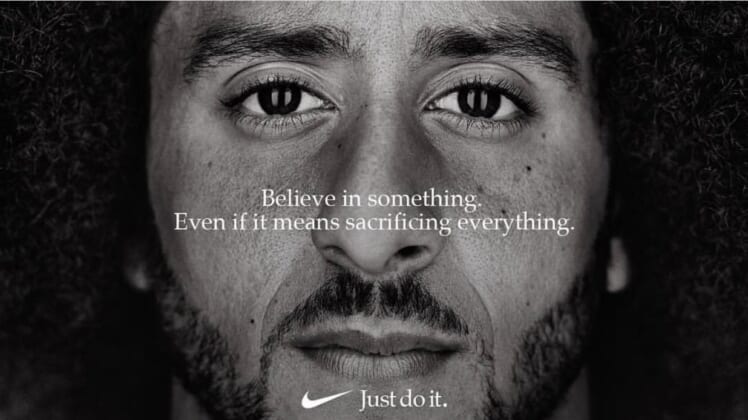 The man who led a national crusade to disparage the national anthem and law enforcement is now the face of Nike’s “Just Do It” campaign.

ESPN was the first to report that disgraced ex-NFL quarterback Colin Kaepernick will headline the 30th anniversary of the “Just Do It” slogan.

Nike’s advertisement features Kaepernick’s face along with the phrase, “Believe in something, even if it means sacrificing everything.”

It’s beyond me why Nike would take such a financial risk and align the company with such a polarizing figure. The only thing that guy is qualified to endorse is knee pads.

ESPN reports the new ad campaign is meant to specifically target 15 to 17-year-olds. In other words — it’s mean to be anti-American propaganda.

“We believe Colin is one of the most inspirational athletes of this generation, who has leveraged the power of sport to help move the world forward,” Nike spokesperson Gino Fisanotti told ESPN.

BREAKING: Nike had been paying Colin Kaepernick all along, waiting for the right moment. That moment is now, as he becomes the face of the company’s 30th anniversary of the “Just Do It” campaign. pic.twitter.com/uccpDStbq5

Were there no other professional athletes who represent Nike’s core values? What about J.J. Watt of the Houston Texans? He raised more than $40 million to help victims of Hurricane Harvey.

If Nike does not want American patriots to purchase their products, that is their right. The good news is there are plenty of companies that sell sports merchandise that are not represented by athletes who disparage the national anthem.

I would recommend you shop accordingly.