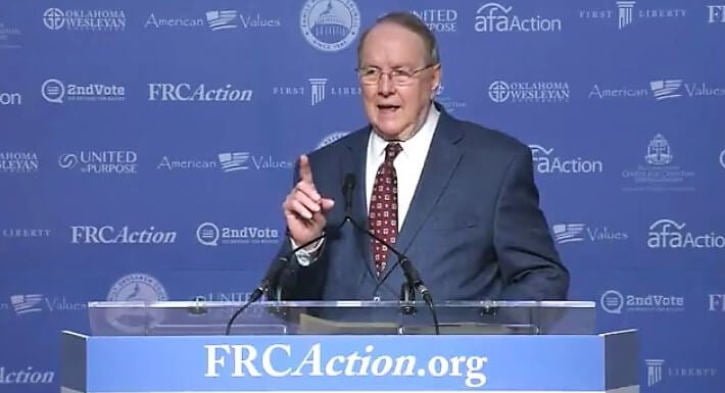 Dr. James Dobson said on The Todd Starnes Show that Democrats are not telling the truth about what’s happening on the border and if the American people really began to understand what’s taking place, they would demand action.

“In the debates, the candidates were talking about the southern border and I was disturbed by what I heard them say,” Dobson said. “They’re accusing the Trump administration of kidnapping children! It is absolutely crazy.”

Dr. Dobson, the founder of FamilyTalk, was recently invited by the White House to visit the border city of McAllen, Texas.

“It was deeply disturbing to me and to my team,” Dobson told the Fox News host. “I really wish every American could see it for themselves because what the media and the politicians are telling the American people is patently unfair and untrue.”

Folks, as I write in my upcoming book, “Culture Jihad,” there is a concerted effort by the left to destroy America and her traditions. They are literally turning our traditions into rubble. Click here to pre-order a copy of my book!

Dobson went on to describe Border Patrol agents as compassionate passionate doing the best they can in a thankless job that deals with thousands of people each day.

“This is politically incorrect to say, but it needs to be said – that President Trump is not to blame here,” said Starnes. “The Border Patrol is not to blame. These are decisions being made by parents that are sending their children to the border, and there must be some responsibility born there.”

Dobson responded by saying that people coming here have created the crisis, but Congress could solve this in an afternoon if members so desired.

“But there is no will to do it,” said Dobson. “Democrats tend to want votes, they want people to flood through those borders, Republicans want cheap labor, and nobody seems to be willing to pay the political price and get in there and help these people.”

With his voice breaking, Dobson went on to say that he can’t tell people how “frustrating” it is to know what’s taking place.

“I don’t blame the people,” Dobson added. “They’re in destitute circumstances where they are, but we can’t feed and house and provide medical care and everything else for the poor around the entire world because it will overwhelm the system.”

It’s not an exaggeration to say “the entire world.” According to Dobson, people are coming to the southern border from as far away as Bangladesh, Pakistan, Turkey, China, and India.

Click here to read Dr. Dobson’s incredibly moving and brutally honest description of what he saw during his visit to the border.