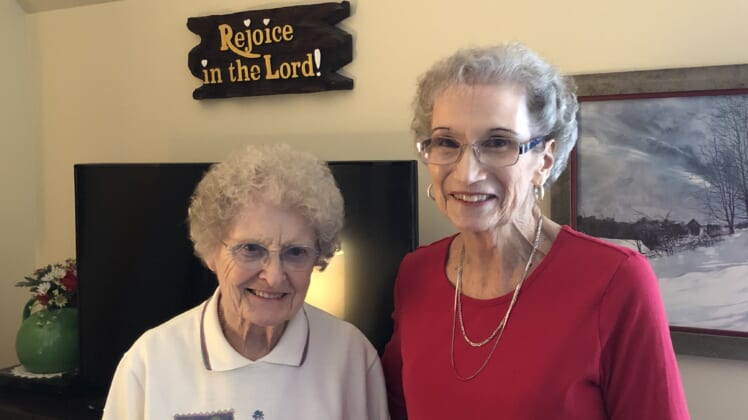 Last December residents at a Michigan senior living center were invited to read Christmas stories to children visiting from a nearby preschool and child development center.

Boys and girls from the Kalkaska Memorial Health Center Child Development Center and Preschool were enraptured by the yuletide stories shared by residents of the Kalkaska Senior Living Center.

One senior citizen regaled the youngsters with Tim Burton’s “The Nightmare Before Christmas,” a dark and scary story filled with monsters and witches and demons.

Wilma Wells chose to read a book about Christmas traditions and afterwards she asked the boys and girls if they knew why we celebrate the holiday.

At that point an unidentified teacher rose up and stopped the elderly woman from proceeding.

“We won’t go there, Wilma,” the teacher declared.

Later, the students were treated to a recitation of “A Charlie Brown Christmas” by resident Joan Wilson. (I suspect you know where this is going.)

Towards the end of the story, Linus recites a historical account of the Christmas story. As Miss Joan was summarizing that portion of the story, the teacher abruptly interrupted Joan, cancelled the visit and escorted the children out of the room.

Poor Miss Joan was left all alone because the teacher apparently got triggered by the reason for the season.

“There’s nothing quite like a government Grinch crushing the spirit of Christmas,” First Liberty Institute attorney Keisha Russell told the Todd Starnes Show.

“Our clients were simply exercising their constitutionally protected rights by reading a much beloved Christmas story to children when they were silenced.”

Kalkaska Memorial Health Center, the government-owned company that runs both groups, did not respond to inquiries for comment.

First Liberty contends the teacher’s actions violated the Free Exercise and Free Speech clauses of the First Amendment of the Constitution.

“Joan and Wilma are private citizens whose speech, including religious speech, is fully protected by the Free Exercise and Free Speech Clauses,” Russell wrote in a letter to the health center.

First Liberty alleges the teacher, who is a government employee, broke the law by censoring or banning certain speakers or speech because of its religious content. It’s called viewpoint discrimination.

“Here, the teacher allowed those who spoke about Christmas in secular terms to speak unimpeded, but abridged the speech of those who spoke to the historical significance of Christmas’ origins.

It’s not the first time “A Charlie Brown Christmas” has triggered a meltdown among leftwing educators.

In 2016 a middle school staffer was ordered to remove a Christmas-themed Linus display from her office door and in 2015 a Kentucky school district removed religious references from a stage production of the program.

First Liberty Institute is calling on Kalkaska Memorial Health Center to apologize to Miss Joan and Miss Wilma for violating their constitutional rights. They also want written assurance that the center’s employees will abide by federal law.