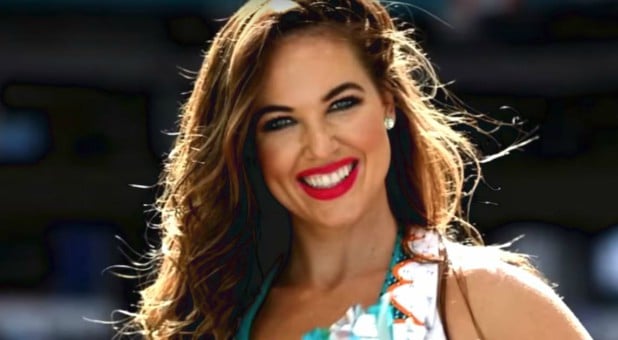 Kristan Ware spent three seasons on the sidelines cheering for the Miami Dolphins. But she declined to try out for a fourth season, claiming she faced discrimination because of her Christian faith.

Ware said on the Todd Starnes Radio Show that she was targeted for ridicule and mockery after she posted a photograph of her baptism on social media – along with a Bible verse.

“Why can’t I be a cheerleader and hold my faith and stand firm in that,” she asked.

Soon after, the cheerleading staff learned she was a virgin and planned on waiting for marriage to have sex. That prompted a meeting with cheerleading director Dorie Grogan.

“Let’s talk about your virginity,” Grogan said, according to the complaint. “As far as we are concerned you have taken something that was once upon a time pure and beautiful and you’ve made it dirty.”

Ware said she was shocked.

“I was told I was not allowed to talk about my virginity to anyone and any time,” Ware said. “I started tearing up and I got told I was too sensitive and too emotional and they were only trying to help me develop into a woman.”

She was also told she could no longer say the name of God.

“It broke my heart – for me as a Christian to feel silenced,” Ware said on the nationally-syndicated radio show.

She took her complaints to the team’s human resources department but the situation only got worse.

“I was told I was completely replaceable,” she said. “Sit there and look pretty in my uniform or I’ll be replaced. That’s horrible. I want every girl out there to know their worth – to know their value.”

Ware filed a complaint with the Florida Commission on Human Relations alleging she was subjected to a hostile work environment for her expressions of faith in Christianity. She is also requesting a hearing with NFL Commissioner Roger Goodell.

Ware said she believes God told her it was time to speak up.

“Don’t turn your back on God,” she said. “Don’t compromise who you are and risk losing your identity in that uniform.”

And her message to teenage cheerleaders?

“That uniform does not define you. You are beautiful just the way you are and your voice does matter,” she said. “Our Lord goes before us. I really believe his hand is on this.”