JUST IN: Trump Says if Acosta Misbehaves “We’ll Throw Him Out” 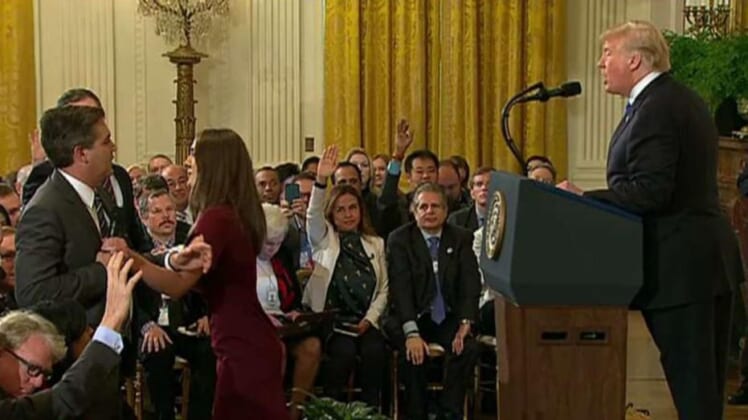 President Trump has a word of advice for CNN reporter Jim Acosta: behave.

“If he misbehaves we’ll throw him out or we’ll stop the press conference,” the president told Fox News Sunday host Chris Wallace.

Wallace landed an exclusive interview with the president for Fox News Sunday. The full interview will be aired Sunday at 2 p.m. and 7 p.m. eastern on Fox News Channel.

CHRIS WALLACE: A federal judge, who you appointed has just ruled that you must give CNN reporter Jim Acosta his press pass back. Your reaction to the ruling, sir.

PRESIDENT DONALD TRUMP: Yeah, it’s fine I mean it’s not a big deal. What they said though is that we have to create rules and regulations for conduct etc. etc. We’re doing that, were going to write them up right now. It’s not a big deal and if he misbehaves we’ll throw him out or we’ll stop the news conference.

WALLACE: What are your rules going to be? What is it that you’re saying:

WALLACE: “This is over the line and you lose your press pass.”

TRUMP: We’re writing them now. We’ll have rules of decorum you know you can’t keep asking questions. We had a lot of reporters in that room, many many reporters in that room and they were unable to ask questions because this guy gets up and starts you know doing what he’s supposed to be doing for him and for CNN and you know just shouting out questions and making statements too.  But I will say this look, nobody believes in the First Amendment more than I do and if I think somebody is acting out of sorts I will leave I will say thank you very much everybody I appreciate you coming and I’ll leave. And those reporters will not be too friendly to whoever it is that’s acting up.