Pastors Organizing to Fight Back Against “Tyrannical” Democrat Shutdowns 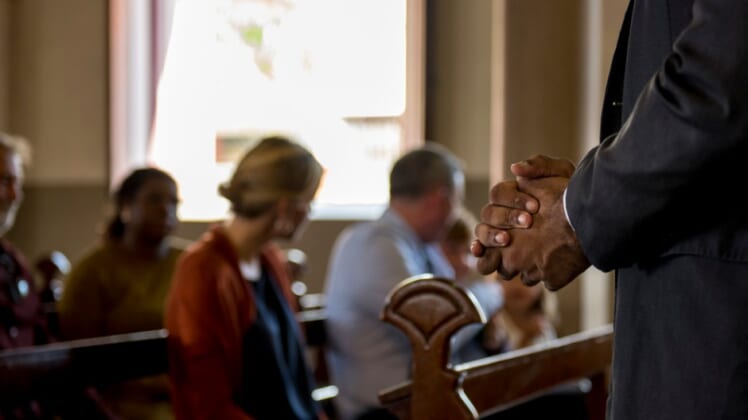 Brian Gibson, a megachurch pastor, told the “Todd Starnes Show” on Wednesday that churches across the U.S. were caught off guard during state crackdowns on worship, but lessons have since been learned and it’s high time that pastors start spreading the good word… on how to fight back.

“We’re going to give pastors and church leaders information that’s going to help them stand up for their First Amendment rights, stand up for the freedom to worship, stand up to tyrannical governors and to stand their ground for the church of the Lord Jesus Christ,” the pastor said on the radio show.

Gibson, the senior pastor of HIS Church in Owensboro, Ky., announced an event scheduled for next Tuesday called, “Church Prepared: You Are Not Alone.” His group, the Peaceably Gather Coalition, organized it to support pastors “in a very difficult time in our nation’s history.”

Todd Starnes, the host of the radio show, said that he will be moderator and Gibson joked that it is an honor to have the “deplorables of deplorables” play such a key role. (Gibson’s comment was a nod to Starnes’ book, “The Deplorables’ Guide to Making America Great Again.”)

Starnes said he believes the event will help mobilize the faithful in the country and help restore religious liberty.

Gibson is the pastor of churches in Kentucky and Texas. He said he has had to deal with restrictions he never thought possible in the country.

“But it’s here…it’s upon us,” he said. It’s become clear to me, Todd, that the church was not prepared for what we’re facing.”

He said that churches have been able to adapt to the restrictions handed down by state governors and the event hopes to share knowledge about what pastors can do going forward.

He called Kentucky Gov. Andy Beshear, a Democrat, “anti-church” in his mandates on church service.  The Courier-Journal reported Thursday that Kentucky has seen a recent uptick in coronavirus cases and currently has 672 patients hospitalized and 161 in intensive care units. the paper reported five new deaths, all above 65 years old.

These pastors insist that they are not reckless when it comes to the coronavirus but call the state guidelines arbitrary at best, anti-religion at worst.

Gibson encouraged all church leaders to sign up Churchprepared.com to reserve their seats.

Starnes has been a vocal critic of many Democratic governors who he said overreached on their authority under the guise of public safety. Critics of these restrictions point to grocery stores and other venues deemed essential. Many Americans say religion in their life is essential.

“We’ve learned some lessons And we’ve made some great friends and connections And I believe at that church prepared event We are going to give pastors and church leaders information That’s going to help them stand up for their First Amendment rights,” he said.