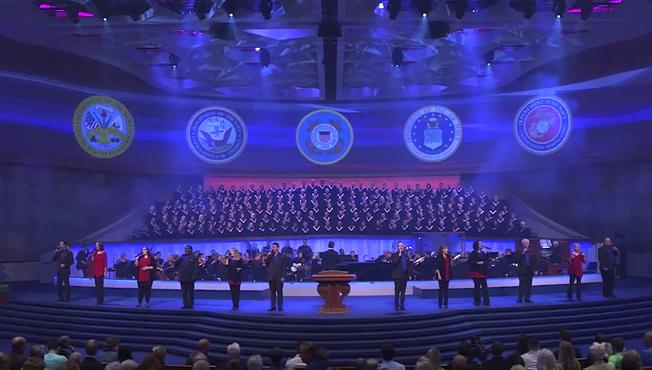 The Pentagon has directed one of the nation’s largest churches to remove insignia representing the branches of the military from an upcoming freedom celebration after an atheist group complained.

The First Baptist Church in Dallas, Texas was planning to honor members of the military during a special June 25 worship service called, “Freedom Sunday.”

“Freedom Sunday is a celebration of both our freedoms as Americans and the freedoms we as Christians have through faith in Christ,” said First Baptist senior pastor Robert Jeffress.

Click here for an autographed copy of Todd’s new book, a handbook on how to be a good Christian citizen of America!

The annual event has caused outrage among atheists and city leaders because of the title of the pastor’s sermon: “America is a Christian Nation.”

The church’s advertisement was removed from billboards after complaints were raised by a Dallas Morning News columnist that the pastor’s message was hateful and divisive.

“The message will present the historical evidence for the bedrock of faith upon which America was founded,” said Jeffress, who also serves as a spiritual advisor to President Trump.

The Military Religious Freedom Foundation jumped into the controversy by objecting to the church’s use of the official seals of the branches of the U.S. military.

MRFF President Mikey Weinstein wrote in a letter to the Pentagon that the church’s program was “repulsive” and use of the seals was a violation of military policy.

“It is imperative that First Baptist Dallas be stopped from associating Robert Jeffress’ divisive, prejudiced, and bigoted version of fundamentalist Christian supremacy, domination and exclusivity directly with the U.S. Armed Forces,” Weinstein wrote.

The Pentagon agreed and sent a letter asking the church to remove the military graphics from the program.

“We are concerned that use of the DoD Component marks creates an appearance of endorsement and or affiliation with your church’s Freedom Sunday, when that is not the case,” a Pentagon official wrote to Jeffress. “Federal regulations prohibit the use of official military markings in ways that imply endorsement of a commercial entity or activity.”

“Because your church has apparently used these seals in the past, we presume you are unaware that the DoD and the Military Service seals, along with many other military insignia, are protected by law from unauthorized use and may only be used for official purposes,” the Pentagon official wrote.

“We understand your goal is to recognize the men and women in the military,” the Pentagon official wrote. “Therefore, recommend the continued use of the phrase ‘Salute to our U.S. Armed Forces’ without the military marks.”

Ironically, First Baptist Dallas used the same military graphics during a performance for President Trump at the Kennedy Center. The Pentagon did not object to that usage.

Nevertheless, Jeffress said the church will comply with the Pentagon’s demand letter.

“We have no animus towards the Defense Department,” he said. “We are still honoring the military and I am still preaching the same sermon.”