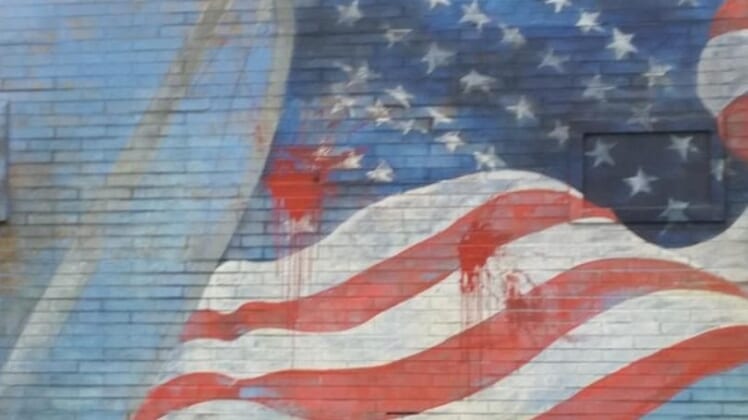 Maria decided to commission an artist to paint an American flag mural on the side of the building a while back.

But the other day – protestors defaced the mural. They said the flag was offensive and that it represented a negative political perspective.

“They didn’t want a flag. They thought that it meant a political position and they were opposed,” Lisante told Fox News.

What to watch this weekend

America-hating protestors took to the streets, according to The Record Online.

“In memory of those murdered by American imperialism,” read one sign.

Like I said – the good people of New Paltz are a patriotic bunch. And they rose up by the hundreds to defend Old Glory.

“I’m saddened and disappointed,” Army National Guard veteran Joey Garcia told Fox News. “It’s one thing to disagree with something but it shouldn’t mean that…you must destroy it. I feel bad for the artist who has put so much time and effort into this painting.”

They condemned those responsible for the vandalism – accusing them of not only disrespecting the flag but also the military. Then the crowd pulled out their wallets and donated money to repair damage — more than $12,000.

There’s a lesson to be learned here — when freedom-loving patriots stand together — we can make a difference. That’s about as American as pizza pie.

Click here to contribute to the fund to repair the damage.