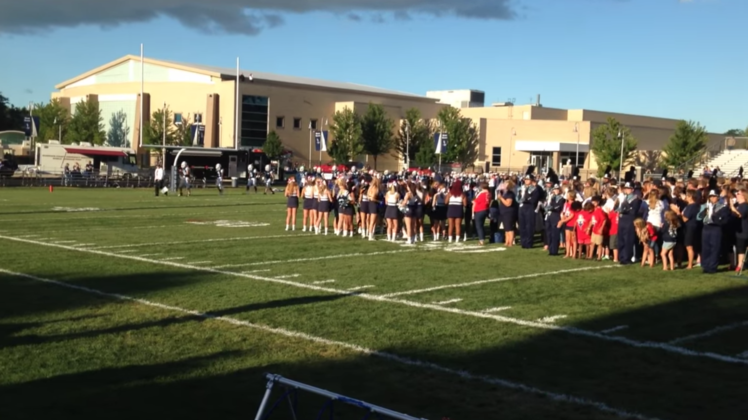 These days it seems that celebrating America is not exactly politically correct – whether its public schools banning the U.S. flag or professional football players refusing to stand for the Star-Spangled Banner.

We’ve seen protesters burn Old Glory while politicians bicker about whether these great United States are still a most exceptional country.

But there’s a little high school on the shores of Lake Michigan that still believes in America. They still believe in concepts like God and Country, duty and honor — the idea that we are still that shining city on a hill.

And what they folks at Mona Shores High School did before the Thursday night football game on Sept. 1st has folks all across the fruited plain grabbing for a hanky.

The Mona Shores Sailors hosted a “Sailor Salute” – a breathtaking celebration to honor the armed forces as well as first responders.

There were tanks and helicopters and marching bands and speeches. They even landed an Army chopper at Sailor Stadium. And of course, you can’t celebrate America without the Freedom Rider motorcycle club. They showed up, too. The kids even passed the hat — to raise money for the Grand Rapids Home for Veterans.

School leadership even encouraged folks to show up for the game with American flags. Yes, Mona Shores really is a public school!

“The most important thing behind the #SailorSalute is to bring our community together so we can honor and support our war veterans, the men and women who have fought and continue to fight for our every day freedoms,” Supt. Greg Helmer told me.

One of the most remarkable moments of their salute took place just before the start of the football game between the Mona Shore Sailors and Zeeland West.

Suddenly, hundreds and hundreds of people began streaming onto the football field. They say there were as many as 1,500 citizens — all wearing red, white and blue.

And when the conductor began to wave his baton, the people began to sing, “God bless America, land that I love…”

“We invited anyone from our community to be a part of the rehearsal and singing,” Supt. Helmer told me.

The choir was a collection of students and moms and dads, grandparents and teachers, churches and local VFW groups — and just regular town folks. Standing on the lush green grass of the football field, their mighty voices soared above the stadium – a musical tribute to those who keep us safe.

Supt. Helmer said it’s important to teach boys and girls and teenagers about patriotism — what it means to be an American.

“It’s a wonderful opportunity for us as a community to teach, model and demonstrate what it means to truly honor our war heroes, our war veterans as well as our first responders who put their lives at risk every day for our liberties and our freedoms,” he said. “And for our students to witness that, to experience that and to actually be a part of that is something special.”

If the folks who run the National Football League have any sense at all, they’d hire that community choir and tell Beyonce and her Dancing Black Panthers to pack up their leather.

The Mona Shores Sailors went on to lose their season opener — but Thursday was about so much more than touchdowns and halftime shows.

“When you can reach the heart and when you can tap into the emotions of the human spirit, long-lasting memories will occur,” the superintendent said. “That’s what the #SailorSalute is all about.”

Years from now, I doubt most folks around West Michigan will remember who won or who lost that game on Sept. 1, 2016.

But I’d be willing to wager they will remember the night a community came together and put aside their differences to honor our military and to as God to bless our nation. Yessir, I do believe they will remember.

It was truly an American moment.