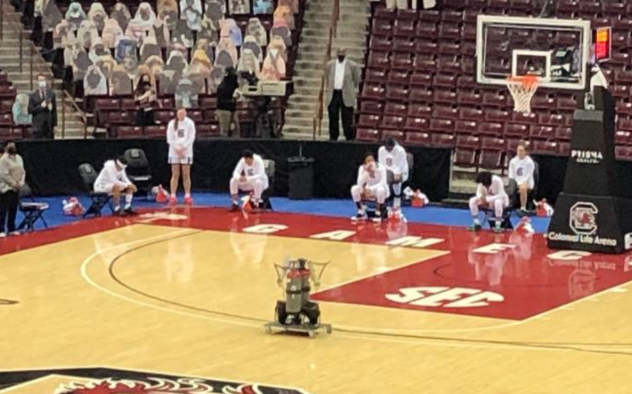 The disrespect for the country has swept across professional sports teams in recent years, and now we’re seeing that same disrespect leak into college arenas as well.

On a day we should be giving thanks for the free country we live in, NFL players knelt during the National Anthem. President Donald Trump commented on what he thought of the current state of the NFL:

With NFL ratings plummeting, it’s easy to see the culprit of the downward spiral: people hate seeing America disrespected by athletes that make millions of dollars in the name of “racial inequality.”

Well-known players such as DeShaun Watson and Matthew Stafford participated in the disgraceful display as well.

Stafford also pledged $1.5 million at his alma mater, University of Georgia. The funds were donated to help promote social justice, inclusion, equity and diversity at the school.

The absurdity doesn’t stop there. Most of the No. 1 ranked South Carolina women’s basketball team stayed in their seats as the National Anthem played during their season opener. Ten of the eleven players sat in protest. The official Twitter account of the team released the following statement in support:

“What matters” is showing respect for the freest country on the planet, especially on a day of giving thanks. People have the right to peacefully protest, but Americans are getting tired of leftist agendas flooding sports arenas, which are one of the few areas in life that people want to escape.

At this point, kneeling or staying in your seat during the National Anthem seems like the “cool” thing to do, and when one kneels, they all follow like dominoes.

If college football and basketball continues down the path of virtue signaling, watch their ratings plummet as well.