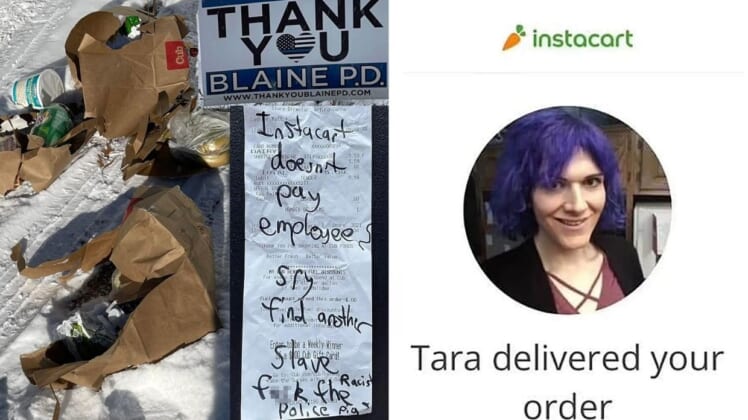 A Minneapolis instacart driver ran over an elderly couple’s groceries and left a vulgar, hate-filled note on their door after noticing a pro-police sign in their yard.

The Blaine couple ordered groceries from their local Cub Foods Dec. 5 and they were “delivered” the next morning, according to the instacart receipt.

When the delivery arrived they walked outside to greet their driver — 36-year-old Tara Olivia Plum from Coon Rapids — worried they might get stuck in the snow in their driveway, but the driver yelled to check inside their Christmas wreath, according to the Blaine Police Department.

The shocked couple then realized the purple-haired driver had driven over their $50 worth of groceries.

Police said Plum, who was cited for criminal damage to property, reacted to a sign supporting the police that read “Thank you Blaine P.D.” with a “Thin Blue Line” flag in the shape of a heart.

Police spokesman Capt. Mark Boerboom said Plum could face up to 90 days in jail if found guilty. He said the incident does not meet the criteria for a hate crime.

Instacart issued the couple a full refund and pledged to provide support and work with local law enforcement.

“We’re appalled by the unacceptable actions of this shopper, who has been removed from the Instacart platform as a result. We’ve been in direct contact with the customers to refund their order and provide additional resources,” the company told KARE 11 in a statement.

Amber Gray, a relative of the couple, set up a GoFundMe that quickly raised more than $13,900.

“Supporting law enforcement doesn’t make you racist. And it absolutely doesn’t give anyone the right to destroy your things or shatter your sense of safety,” Gray said.