Elderly Patriots Threatened With Jail for Reciting the Pledge 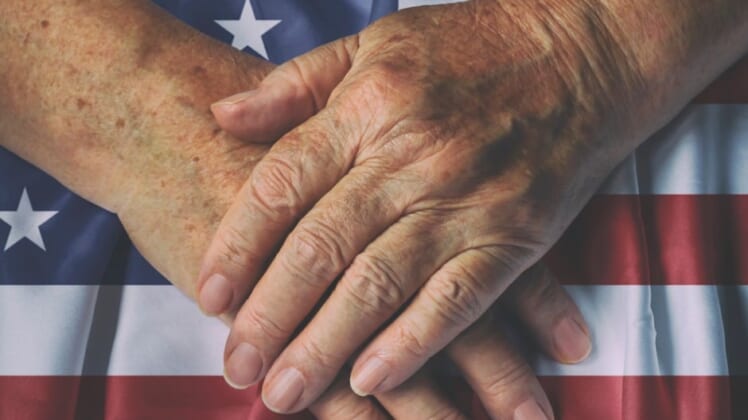 A raging battle over prayer and the pledge of allegiance at a Washington State community center took an ugly turn when military veterans were thrown off the property and elderly patriots were told to recite the pledge inside a closet.

The board of directors at the Mullis Community Senior Center on San Juan Island decided to revise its lunchtime program by removing the traditional prayer and the recitation of the pledge.

The center’s executive committee blamed the prayer and the pledge for a decline in attendance, as I mentioned on the Todd Starnes Radio Show Podcast.

“We discovered that many of the incoming seniors were uncomfortable with an introductory ceremony where the Pledge of Allegiance and prayer were recited,” they wrote in a letter to the San Juan Islander.

The senior center went on to say they had a “duty to provide a safe and peaceful environment in our building and on our property, inclusive to all.”

“One day they went in there and the flag had been taken away and locked in a closet,” she said on my radio program. “That flag had been in the building for more than 20 years.”

When that happened, they reached out to some of the most patriotic folks in town for some assistance – American Legion Post 163.

“It’s unbelievable this is happening in the United States of America,” Post Commander Daven Holzer told me. “When an Army veteran got up to say the pledge (a staffer) was waving her hands a half inch from his face and yelling at him that he’s not authorized to say it.”

He said another staffer was overheard telling an elderly resident that if they wanted to recite the pledge they should do it in a closet – where they had hidden the flag.

Long story short – the community center called the law on the American Legion and the silver-haired patriots.

And so did Miss Minnie.

“My crime was that I made up some stickers that said, ‘I stand for the pledge” and was wearing one and giving them to other senior citizens,” she told me. “I have a trespass notice that will include fines and possibility imprisonment if I set foot on the property again.”

There has been a concerted effort by the left to eradicate devotion to God and Country as I write in my upcoming book, “Culture Jihad: How to Stop the Left From Killing a Nation.”

In response to the outrage, the community center said they would restore the flag to its rightful place. They are reportedly working on a plan to reinstate the recitation of the pledge but the lunchtime prayer is history.

“It’s amazing to me that this could happen in the United States,” Miss Minnie said. “We have presented a formal petition signed by 200 people requesting that the traditions be restored and it was totally ignored.

Ultimately, this is a fight about defending traditional American values, God and Country. And I suspect the fight is far from over. That’s why freedom-loving patriots must stick together.

So, I made Miss Minnie and the American Legion a promise that if any of them were arrested for reciting the Pledge of Allegiance, I would be honored to pay their fines.