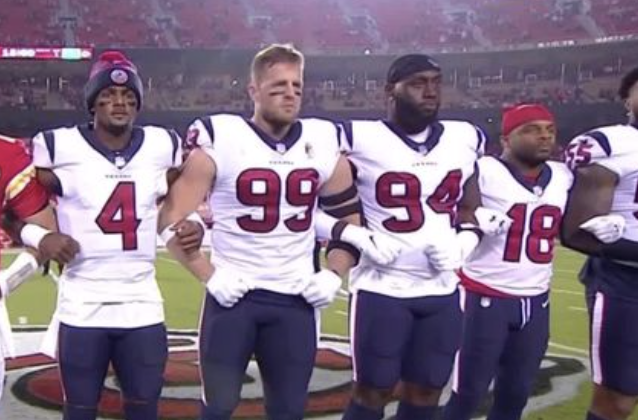 A caller into the “Todd Starnes Show,” on Friday, who said he was a Houston Texans fan for decades said he was so outraged by the team’s protest Thursday night that he took one of his favorite Texans hats and tossed it into a bonfire.

Ken, from White Hall, Ark., said he bought the hat a while ago at a home game and spent “good money” on it. He said prior to moving to Arkansas four years ago, he lived in Houston for over three decades and embraced the team and its players.

J.J. Watt, the team’s defensive tackle and one of the NFL’s best ambassadors, used to attend high school games in Peachland, which is just outside Houston, and Ken said he and his son “loved” him.

But this is a sensitive time in sports and some fans feel like leagues are leaving them behind. Prior to the kickoff on Thursday night during the NFL’s opening game, there were numerous political gestures. The black national anthem was played, Texans players stayed in the locker room during the national anthem and teams locked arms in a moment of unity to speak out against racism in society.

SEE IT: BIDEN SPOKESMAN COULD HAVE USED A TELEPROMPTER

Many fans booed, not because they don’t believe in some of the messages, but because they are tired of being preached to by millionaire athletes who play for a league that has been criticized for its handling of players accused of beating women, domestic violence and even racial protests prior to the “woke” trend in society.

“When I saw what the Texans did and the preaching that went on before the game and everything—I had a hat that I paid good money for when I was at a game down there and we brought it out here and we had a bonfire. That’s it with me and the NFL and the NBA…I couldn’t care less,” Ken said.

He said that he filmed a video of the bonfire but said he’s “too old” to know how to upload it online. He said that he has been kicked off Facebook “because a Democrat didn’t like something I said, so I’m still in Facebook jail for the next 21 days, I believe.”

Todd Starnes, the host of the radio program, laughed and said, “Brother, I’ve been in Facebook jail so many times, it’s like a Johnny Cash song.”

Ken seems to be on the Most Wanted list by the Facebook police, because he said he was banned once before and it took all of 17 minutes before he was banned again.

Starnes took another call from Joe in Little Rock, Ark., who also criticized the league after the game. He said it was wrong that they played the black national anthem.

“If this is the new national anthem, who is their president?” he asked.

Starnes pointed to a report on Watt, who called the fan booing during the players’ “moment of unity” “unfortunate.”

“I don’t fully understand that. There was no flag involved. There was nothing involved other than two teams coming together to show unity,” Watt said.

Ken said there is no justification for criticism of the fan reaction who have to just sit back and watch these players make a statement.