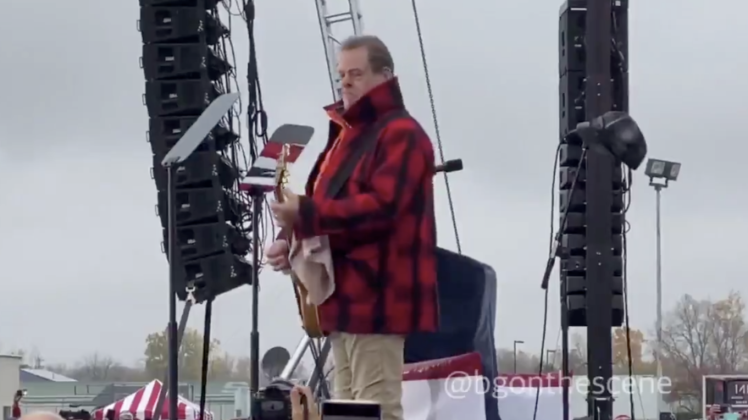 Ted Nugent, the famous conservative musician, played a stirring rendition of “The Star-Spangled Banner” at a Donald Trump rally in Lansing, Mich., on Tuesday.

Nugent’s guitar solo was reminiscent of Jimi Hendrix’s performance at Woodstock in 1969. Stars & Stripes reported that it remained a mystery if Hendrix was a form of protest, which is the general belief.

Nugent, who is a Michigan native, told the “Todd Starnes Show” in July that he was named an advisory board member for the Trump campaign.

Nugent said that the 2020 election will play a dramatic role in the future of the country. He said that it is incumbent on all Americans to keep the pressure on their elected officials.

“That’s why we elected Donald J. Trump,” he said.

Joe Biden continues to hold a significant lead over Trump in Michigan, according to a new poll by the Detroit News and WDIV-TV. The poll showed that the former vice president is leading Trump by 8 percent. The Detroit News pointed out that Trump won the state in 2016 by 10,704 votes, which was his smallest margin of victory in the country at the time.

‘IS THERE SOMETHING WRONG WITH HER?’ TRUMP WONDERS ABOUT KAMALA HARRIS

Trump tweeted a video of the crowd in Michigan at one of his rallies and said, “This Election Day, you must stop the Anti-American Radicals by delivering Joe Biden and the Far-Left a thundering defeat at the ballot box! Get out and VOTE! On November 3rd we must finish the job and Drain the Swamp once and for all!!”