“We’ve Been Abandoned By Our Government!” Owner of Small Town Diner Has Had Enough 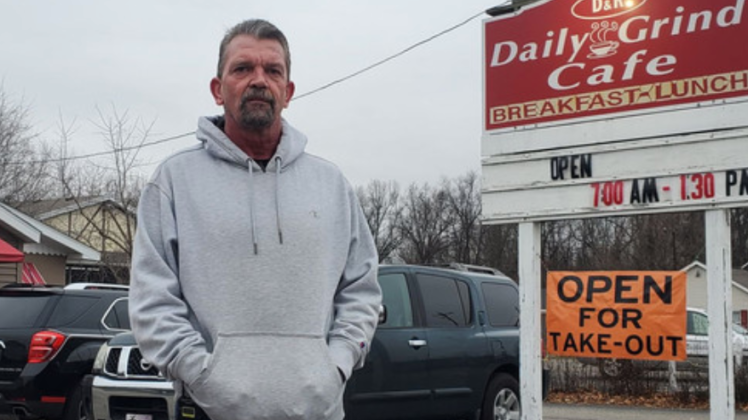 Dave Morris, the restaurant owner in Portage, Mich., whose live confrontation with a news reporter went viral over coronavirus restrictions, told the “Todd Starnes Show” on Thursday that he has been pushed to the financial brink and has decided to stand up for his right to earn a living.

Morris, 59, has told local media that he does not intend to close his business’ indoor service despite warnings from the Kalamazoo County Department of Health and Community Services, according to MLive.com. He called the state’s latest restrictions tyrannical and pointed to how major department store chains are exempt from these rules.

He told the newspaper that the government picked on the “small segments of the economy that can’t fight back.”

But now, with his back against the wall, he has decided to make a stand.

Morris, the owner of D&R Daily Grind, told Todd Starnes, the host of the radio show, that he has been operating his breakfast café for 12 years. The shop opens daily from 7 a.m. to 1:30 p.m. He said it is a family-run and they have abided to mandates since the spring when it was forced to operate as take-out-only. In June, the state ruled that restaurants could operate at half capacity.

“When we opened at half capacity, at least we were able to pay the bills again, because the takeouts weren’t sustaining the business,” he said.

He said that the state slowly began to see more cases and implemented new restrictions. His establishment is considered a bar/restaurant and was told that he must go back to takeout-only. He said since the new guidelines, he saw a dramatic drop in business and he simply cannot afford to keep his indoor eating banned.

“Monday of this week was just a terrible day,” he said. “The worst they we’ve had 11 years. And I finally said, ‘This has got to stop.’ I’m watching the Department stores, the airplanes, people sitting side by side in their eating meals in airplanes for four hours.”

He said that he sanitizes his restaurant on a continuous basis and not one case has been traced back to his shop. He said the strain has been hard on his wife and family.

“They’re picking on the small guys up here because they don’t think that we’ll rise up and our voices be heard,” he said.

Starnes said it was remarkable because a local station seemed like it was trying its best to depict him as the bad guy during its report that went viral when Morris challenged a reporter during a live hit from in front of the restaurant.

“My government leaders have abandoned me,” Morris told the reporter. “Four trillion dollars of stimulus money, they gave it to who? Special interest groups and campaign donors.”

He said that he was “abandoned” by his government and put him in the position where he has to fight back.

Tyler Cardon, the CEO of Blaze Media, tweeted, “We’re all Dave Morris. Time is up.”