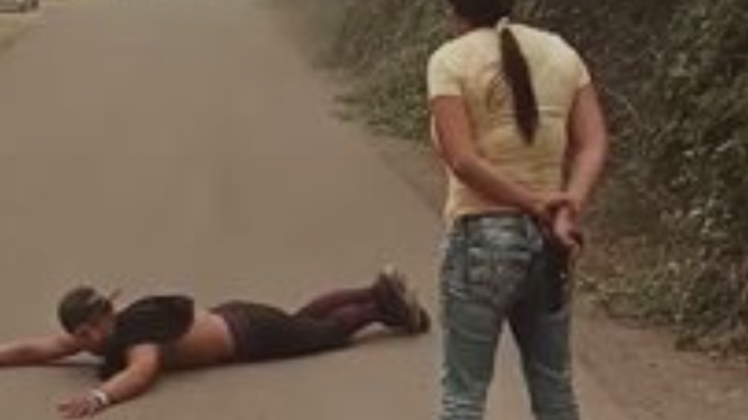 Well, that went up in smoke.

An Oregon woman has been hailed a hero after she reportedly intervened last weekend on an alleged arson attempt and held the suspect at gunpoint until police officers took him away.

Kat Cast, the woman in the viral video, said she might not be “as nice as I was.”

The video emerged as much of the western region of the U.S. has been fighting massive fires that have led to dozens of deaths and evacuations. Oregon has been hit particularly hard.

The suspect in the video was not identified but the video showed Cast getting out of a vehicle and asking the man what he’s doing on her property. The man responded that he was just passing through. She asked him why he was holding matches and he brushed off the question and said he smokes.

She asked him to show her his cigarettes and he apparently did not have any.

“Get on the floor, right now, face down! What are you doing on my property?” Cast yells. “Did you light anything on fire?”

The Daily Mail reported that Cast claimed the suspect threatened to start a fire. The news website said Cast took to Facebook to describe the interaction. She said that she discovered him walking on her property, walked him out into the street and “when we got to some asphalt ground on the main road [where I] made him lay down while cops arrived.”

She claimed that the suspect is a criminal with multiple warrants—including assaulting a police officer—and if her husband was there he would likely be dead.

The report said that it is unclear if the man in the video was charged with any crimes.

Fox News reported that the Evergreen State has had looting, which has compounded the tragedy as residents try to evacuate.

“If I need to do this again to protect my family and my neighbors, I will in a heartbeat do it again, except this time I will not be as nice as I was,” she said.