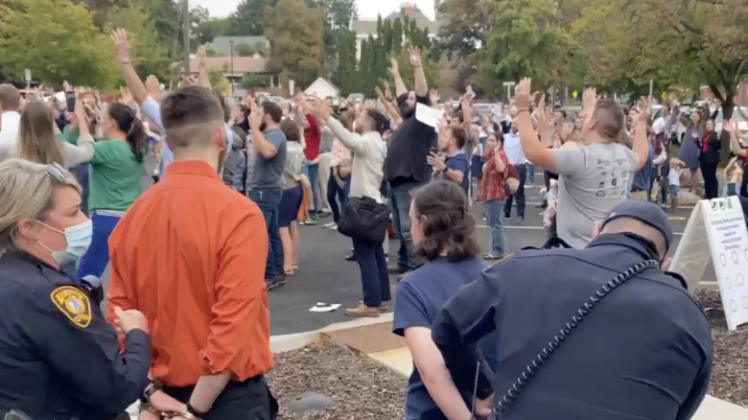 Who knew attending a “psalm sing” can lead to legal trouble?

Gabriel Rench, a Republican who is running for Latah County commissioner in Idaho, told the “Todd Starnes Show” on Monday that he was arrested last week after attending a “psalm sing” near the town of Moscow’s City Hall after refusing to hand over his identification card to city police officers.

Moscow Police Chief James Fry told the Moscow-Pullman Daily News that police made three arrests at the event and issued five citations. Rench was not charged, the report said but he allegedly refused to identify himself to police.

Rench told Todd Starnes, the host of the program, that the event was intended to call out what many see as the city’s arbitrary mandates during the coronavirus outbreak. He said the city just recently passed a resolution extending its call for face coverings and social-distancing rules until the beginning of the year.

He said that Pastor Ben Zornes, the organizer of the event, has organized similar events in the past and the city’s police did not enforce the mandates. But before the event on Wednesday, Rench said police warned the crowd that they would enforce the resolution.

Rench said he and his mother were approached by an officer who asked him for his identification. Rench said that he refused and asked the police officer why he was standing up for the mayor’s office and not its citizens. He said the interaction continued and he was eventually arrested after refusing the officer’s request.

He said that the city has allowed church worship but the whole point of the psalm sing was to voice protest over the “unconstitutional resolution telling people to wear clothing And telling people how to worship and how to assemble in public.”

He spent about two hours in jail and– right before leaving– noticed two deputies not social distancing and also not wearing masks. He said he called them out because it was clear that the “arbitrary rules” don’t apply to everyone.

He denied claims that his arrest could have been a political decision in order to bolster his candidacy against the incumbent Democrat Tom Lamar in November.

“I wasn’t going there to get arrested I wasn’t even thinking they were going to hand out citations,” he said. He said, however, that he is happy that his arrest is getting some media attention so more people know exactly how these coronavirus mandates are being enforced in cities across the country.