WARNOCK: “America Needs To Repent For Its Worship of Whiteness” 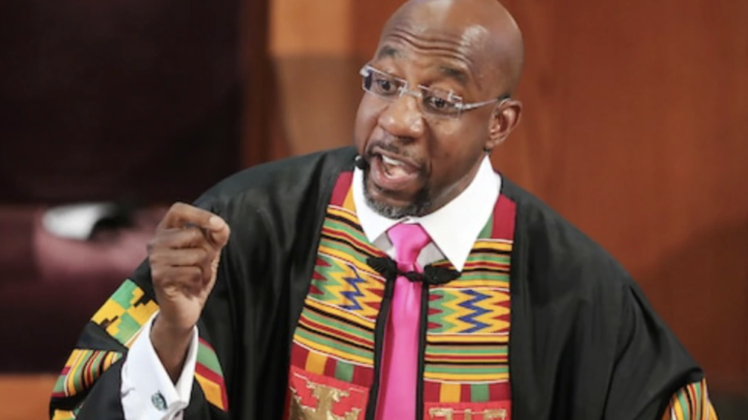 U.S. Senate candidate Raphael Warnock, who once defended Jeremiah Wright’s condemnation of the nation, said America needs to repent for its worship of whiteness.

“If it is true that a man who has dominated the news and poisoned the discussion for months needs to repent, then it is doubly true that a nation that can produce such a man and make his vitriol go viral needs to repent,” the Georgia Democrat and “pastor” said in an address at Atlanta’s Candler School of Theology right before the 2016 presidential election.

“No matter what happens next month, more than a third of the nation that would go along with this is reason to be afraid,” Warnock went on to say. “America needs to repent for its worship of whiteness on full display.”

Warnock, who is pastor of historic Ebenezer Baptist Church in Atlanta, once drew outrage when he said abortion is consistent with his Christian worldview.

“This is what division and fear looks like,” Sen. Kelly Loeffler (R-GA) wrote on Twitter. “We are all God’s children. This rhetoric is disgusting and offensive.”

Wright, who once served as Barack Obama’s pastor, infamously said our nation’s chickens had come home to roost.

“The government gives them the drugs, builds bigger prisoners, passes a three-strike law, and then wants us to sing ‘God Bless America,’” Wright yelled. “No no no, not God bless America,” he thundered from the pulpit. “God damn America, that’s in the Bible, for killing innocent people, God damn America for treating her citizens as less than human, God damn America as long as she tries to act like she is God and she is supreme.”

? Jeremiah Wright's mentee Radical Raphael Warnock is out with a new ad ? pic.twitter.com/YZV9HO4vOC

Warnock praised Wright as a preacher and prophet.

“We celebrate Rev. Wright in the same way that we celebrate the truth-telling tradition of the black church, which when preachers tell the truth, very often it makes people uncomfortable,” Warnock said in a 2008 appearance on Fox News.

It appears that Reverend Wright and Reverend Warnock are two preachers cut from the same anti-American race-baiting cloth.

.@ReverendWarnock, THIS is what division and fear looks like.

We are ALL God’s children.

This rhetoric is disgusting and offensive. #gapol #gasen pic.twitter.com/z5qx8Upa1s