Remember When Democrats and Hollywood Mocked Trump When Terrorists Raged Outside White House Last May? 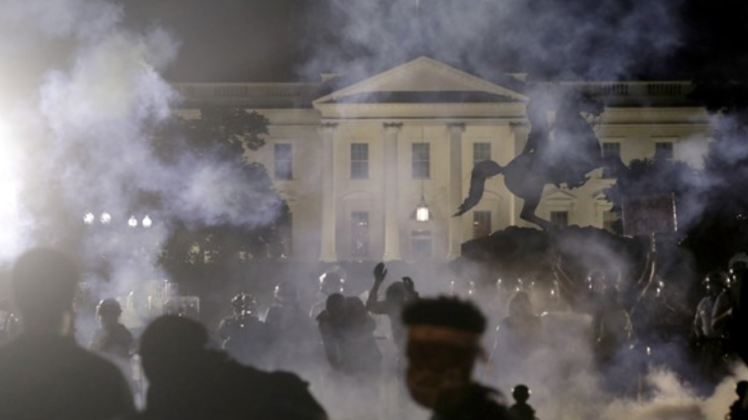 Rep. Tom McClintock, R-Calif., wondered aloud recently that if Democrats and city leaders actually acted on the growing risk of violent protests in Washington D.C., the riot at the Capitol earlier the month could have somehow been prevented.

“If we had prosecuted BLM and Antifa rioters across the country with the same determination these last six months, this incident may not have happened at all,” McClintock said during a floor speech last week.

Alas, the riot at the Capitol did occur and Democrat lawmakers are intent on not letting a good crisis go to waste. Sen. Rand Paul said the Capitol looks like a militarized zone, filled with National Guard troops, barbed-wire fences and newly installed metal detectors. Washington, D.C. Mayor Muriel Bowser finally found her tough-on-crime footing and said that the new safety protocols will likely remain in place for some time.

It is nice to see Bowser and Democrats take a tough stance on rioters because they surely didn’t back in May when the New York Times reported that Secret Service agents had to rush President Trump into a bunker for safety during one of the city’s famous “peaceful protests” in honor of George Floyd.

Instead of Democrats showing even a trace of concern that the president was forced to be moved into a bunker designed for a terror attack, they used it—like always—as a political gift and tried to portray Trump as weak.

Even good-old Joe Biden couldn’t resist. The campaign for the same guy who said he would like to physically assault the president, ran a commerical trying to portray Trump as weak.

“The nation marches for justice, and like a deer in the headlights, he’s paralyzed with fear. He doesn’t know what to do, so he hides in his bunker,” the narrator of one of the commercials said.

CNN’s Chris Cillizza, the “editor-at-large” at the network, quickly penned an article, “Donald Trump’s ‘Bunker’ Story Tells You Everything You Need to Know About Him.”

Cillizza, who is apparently CNN’s example of grit and bravery, wrote that Trump’s denial that he was rushed to the safe room is an example of his false bravado.

“There is nothing Trump hates more than weakness. And the image of him cowering in an underground bunker while protesters stood outside the gates of the White House is simply not something he cannot accept. This is a man who has been telling himself a story of his life — one in which he is always the toughest, the smartest and the winner-est — for, well, his entire adult life,” Cillizza boasted.

The Times first reported about Trump’s move to the bunker on May 29 and noted that some protesters threw bricks and bottles at the White House. The paper said the protest outside the White House was peaceful, but “turned more volatile as crowds surged forward against lines of riot police.”

It would have been interesting to see if Democrats actually showed concern about the commander-in-chief instead of trying to damage him. But it turned out to be politically effective.