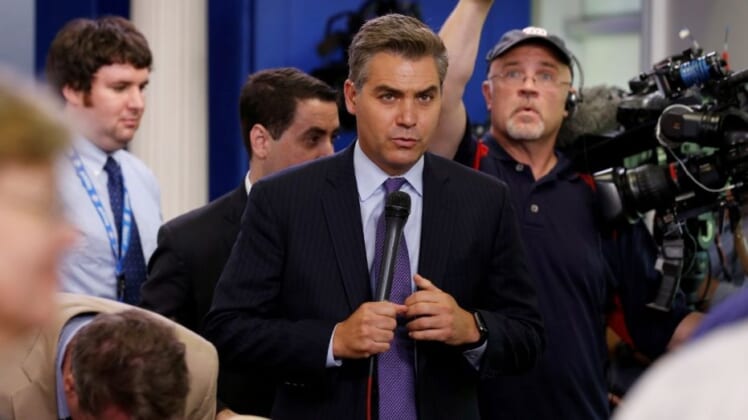 President Trump’s popularity is soaring among voters in spite of round-the-clock attacks from CNN’s Jim Acosta and others in the Fake News industry.

“When they see the anger from the media – the seething rage against this president, it drives people to the president’s corner,” Republican National Committee spokesperson Kaley McEnany said on the Todd Starnes Radio Show.

According to McEnany, the poll reflects Trump’s recent victories for the American people.

“The President is winning for the American people and they notice success when they see it,” she said. “The economy is soaring.”

McEnany also discussed the 4.1% GDP and a recent Associated Press report showing that wages are increasing at the fastest pace since 2008.

She also slammed the “Fake News” media for publishing and airing false reports that the U.S. economy is struggling, noting that the American people ultimately support the president and his agenda.

“Jim Acosta has a right to act angry and rude which he often times does in perpetrating fake news but supporters have a right to articulate their First Amendment thoughts,” she said.

Starnes agreed, noting that his listeners are tired of members of the press attacking the president without cause, adding that the American people notice that “the mainstream media has an agenda.”

McEnany said that while press members like CNN’s Jim Acosta are certainly free to express their views, the media shouldn’t forget that protection under the First Amendment applies to Trump supporters as well.

In noting that the president’s support among Hispanic voters is up by 10 percent, McEnany said attacks on President Trump by the media “drives people to the president’s corner.”

“This is defying anything the media is saying or doing,” she said.

Starnes and McEnany also discussed the president’s support of the importance of vocational trades–like welding, air conditioning, and mining.

“There has been a disconnect in the way we educate people post high school and the job needs,” McEnany said, adding that there were manufacturing jobs available during the job crisis, but that no one was trained to do them.

McEnany said the president and his administration are working with American companies to encourage more American workers to consider pursuing vocational trades.

“People do want those kinds of jobs,” Starnes said. “This is who we are as America.”

McEnany also said the success at the RNC is unprecedented, with President Trump’s name being used positively in campaign ads fifteen times more than those of former Presidents George W. Bush and Barack Obama.

In terms of drawing out supporters in liberal states like Oregon, McEnany said the RNC is focusing on attacking the Democratic platform of abolishing Immigration and Customs Enforcement (ICE), as well as highlighting the failures of socialism abroad.

McEnany said “only 25 percent” of people want to abolish ICE. “People don’t like when you disparage law enforcement.”

The RNC spokesperson is also confident when it comes to bringing about change in California, noting that John Cox, the Republican running for Governor in the state, is gaining ground on his democratic opponent.

“If John Cox could pull it off, it would be a big deal,” she said, referring to growing distaste of Democratic leadership among California voters due to sanctuary cities and increasing crime rates.

“They want safety in their streets,” she said. “I think people are rebelling against what they are seeing in California.”

Starnes agreed, warning that conservatives cannot simply “sit on the sidelines” because Republicans are in the majority.