Boy Humiliated After School Orders Him to Remove Trump Jersey 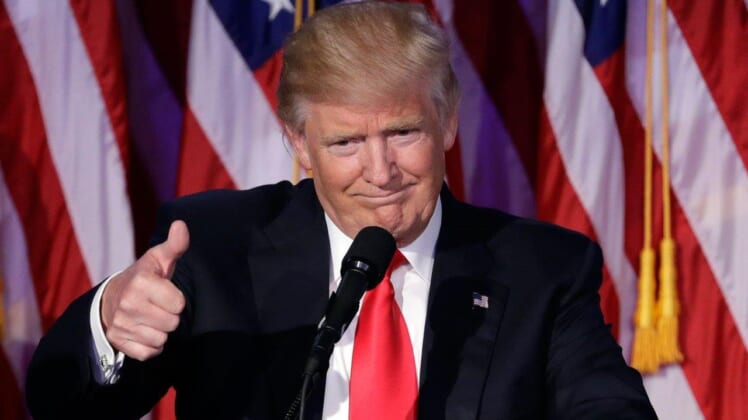 A North Carolina teenager who wore a President Trump jersey to a high school football game was ordered to remove the jersey after other fans became offended, a school spokesperson told the Todd Starnes Radio Show.

“One student wore a jersey with President Trump’s name on the back and the number 45.  Others in attendance at the game were apparently unhappy with the student’s shirt and began creating a disruption,” a Harnett County Schools spokesperson said.

Instead of asking the unruly football fans to leave the game, the principal of Harnett Central High School confronted the teenager wearing the Trump shirt.

“In an effort to pacify the situation and avoid further disruption, the principal asked the student if he would be willing to change his shirt,” the spokesperson said.

Mike Collins tells television station WTVD that his 18-year-old son was humiliated when the principal confronted him at the stadium.

A father tells me his son was asked by the school principal to remove this jersey during a patriotic-themed football game after people complained. Dad, a registered Democrat, says his son complied but felt humiliated. @HarnettCoSchool says it supports expression not disruptions pic.twitter.com/W9U9v2vBLF

He said his son wore the pro-Trump jersey because the high school’s theme night was about celebrating America.

Collins, who is a registered Democrat, said his son complied with the principal’s demand and then left the football game.

“We’re not promoting Donald Trump. He’s our president. Again you’ve got to respect your president. I can assure you that there was nothing about this shirt that was disruptive. I think we should stand up for our rights,” Collins told the television station.

The school district denied that the boy was ordered to remove the jersey and rejected complaints that the principal opposed the rights of students to support the president.

“It was a request, not a directive, and was not politically motivated in any way,” the spokesperson said.

Do they really expect us to believe the principal casually suggested to the boy that he might want to consider changing his jersey?

Regardless, the school district has reached out to apologize to the family for what happened.

“She quickly realized that a better approach would have been to address the other individuals creating the disruption, and she contacted the student’s family to express her apologies.  Other school officials have done the same,” the district said.

Let’s hope the grownups in charge have learned their lesson.