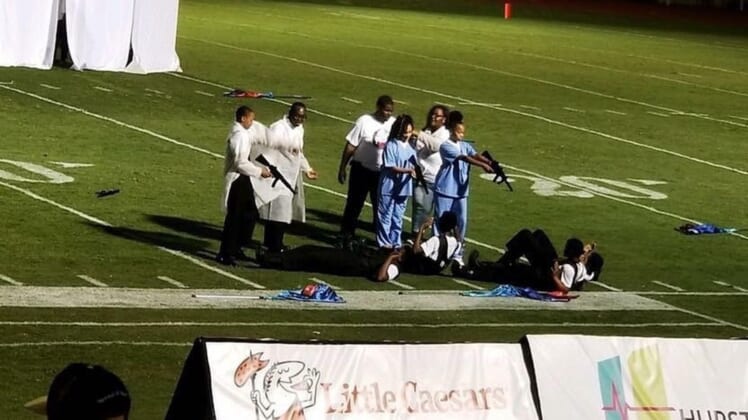 “This is unacceptable in a civilized society,” Gov. Phil Bryant wrote on Twitter. “Someone should be held accountable.”

Forest Hills High School’s performance during halftime against Brookhaven High School was an adaptation of a scene from the movie, “John Q.”

“How could any administrator think that halftime show was appropriate,” State Sen. Sally Doty told the Clarion-Ledger newspaper.

This is unacceptable in a civilized society. Someone should be held accountable. https://t.co/hq3hJnj4xA

State Rep. Tom Miles said a number of lawmakers are calling for the Mississippi Dept. of Education to investigate the band’s performance.

“I have had a tone of messages on this completely despicable, disgusting and disrespectful act from last night,” Miles said in remarks reported by the newspaper.

“JPS has a great deal of respect and appreciation for our law enforcement partners,” Greene said in a statement. “The band’s performance does not depict the values and people in our community, and was incredibly insensitive to the students, families, law enforcement officials and the entire Brookhaven community.  For this we sincerely apologize to all, and we pledge to do better in the future.”

The Clarion Ledger reports that the band’s director has been placed on administrative leave.

“While I do not believe that there was a malice intent on behalf of the students that participated in this halftime show, I understand that we are ultimately not defined by the things that we set out to do but rather how we respond to the things that actually do take place,” Jackson Mayor Chokwe Lumumba said in a statement. “Our students should have been instructed that this was neither the time or place for that performance.”

This is the same state where another high school marching band was not permitted to perform “How Great Thou Art” because it allegedly violated federal law.