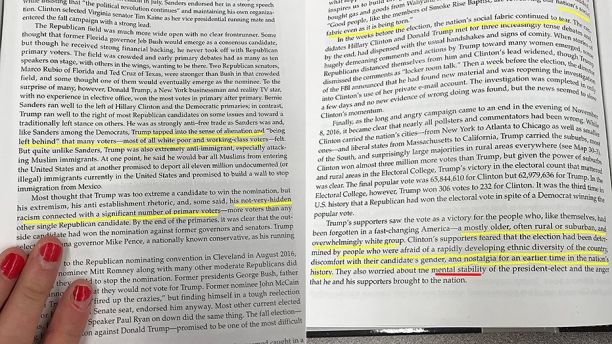 Pearson Education is defending a new high school textbook that depicts President Trump as mentally ill and his supporters as a bunch of poor, white hillbillies.

The anti-Trump propaganda is included in the upcoming edition of “By The People: A History of the United States.” The textbook is written for Advanced Placement students.

“Clinton’s supporters feared that the election had been determined by people who were afraid of a rapidly developing ethnic diversity of the country … They also worried about the mental instability of the president-elect and the anger that he and his supporters brought the nation,” the book states.

Tarra Snyder, a student at Rosemount High School in Minnesota, discovered the shocking passages and she appeared on the Todd Starnes Radio Show to share her concerns.

“I think that if people are only being educated with skewed facts or half the information, then a good debate can’t happen and they can’t be fully informed to make an appropriate decision on where they stand on the political spectrum,” she said.

The book goes on to describe President Trump as an extremist and his “not-very-hidden racism connected with a significant number of primary voters.”

“Trump’s supporters saw the vote as a victory for people who, like themselves, had been forgotten in a fast-changing America – a mostly older, often rural or suburban, an overwhelmingly white group,” the book reads.

That’s laughable. Who was on that peer review board — Hillary Clinton and the staff of CNN?

“(It was) designed to convey college-level information to high school students and aims to promote debate and critical thinking by presenting multiple sides of the 2016 election.”

This is what public school indoctrination looks like, folks. There’s no telling how many history teachers will be using this textbook to poison the minds of their students.

They may as well be using Saul Alinsky’s “Rules For Radicals.”