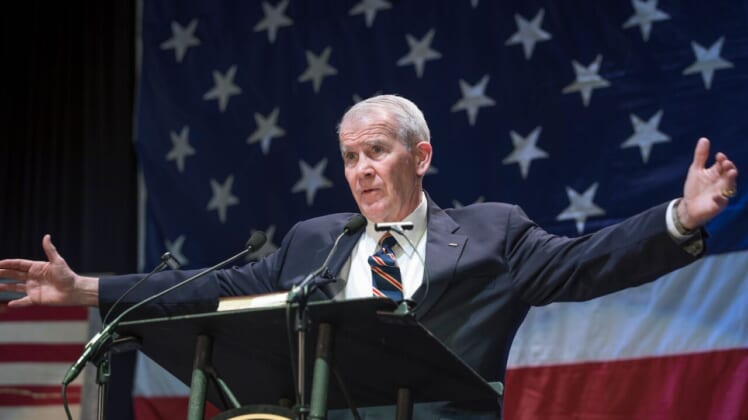 “My target is very simple, I want to add another million voters to the NRA rolls,” Lt. Col. Oliver North told Starnes. He noted that many people thought that such a goal was impossible, but he believes it is quite doable, adding that in the 24 years he had served on the organization’s board, the membership had gone from less than three million to six million

“Those are the most powerful voters in America,” North said. “The influence of the NRA isn’t money going into campaigns, it certainly helps, but …Here’s a core set of values that you and I share, and most of our voters share, and we go out there and we back candidates that want to support the constitution of the United States.”

North said that the NRA, which was found in 1871 to promote marksmanship and firearm safety, was facing a “full frontal assault” following the Valentines Day massacre in Broward County Florida.

“What we’re facing is a frontal assault that uses every lever of power against the NRA. They’re using legal attacks. They’re using cyberattacks. They’re using intimidation and threats and harassment. They’re actually vandalizing, committing crimes like calling the cops to an NRA person’s house and the middle of the night,” North said, adding that it was “pretty clear” to him that a “psychological warfare operation” is being waged against the organization.

The new NRA president said that this attack on the United States Constitution is the “most effectively organized since the Soviet Union.” He went on to detail how the organization continues to face attacks that North believes were “ready to go” when the massacre occurred.

The retired Marine speculated that those opposing the NRA had to have a “war room somewhere,” and said it could be run by billionaire Democrat donor George Soros.