Mike Huckabee: I’m Done With the NFL and the NBA 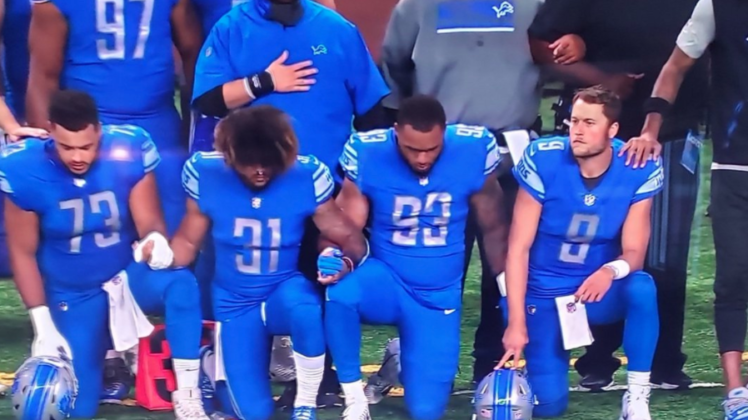 Mike Huckabee, the former Arkansas governor, called out the double standard imposed by the mainstream media after some Kansas City Chiefs fans booed NFL players who protested before the start of the first game of the season.

The Chiefs played the Houston Texans and turned the pregame into a social-justice rally. The Texans remained in the locker room during the national anthem and there were messages like “We believe Black lives matter” and “It takes all of us” prior to the coin toss. The opening also featured Alicia Keys singing the black national anthem called “Lift Every Voice and Sing.”

Some fans booed when players locked arms at the beginning of the game and were criticized by society’s best moral compass: sports announcers.

“Why isn’t that totally appropriate?” Huckabee asked, during an appearance on the “Todd Starnes Show.” “If you say you can only protest if you agree with what I say, as I’m walking down the street burning a tire, throwing a Molotov cocktail or taking a knee on the football field in a stadium. And if you don’t agree with that, you have no voice.”

Todd Starnes, the host of the radio program, pointed out how there was a 16 percent drop in viewers during this year’s NFL opener compared to last year.

“I’m surprised that it’s only a 16 percent drop,” Huckabee said. “I honestly thought it would have been more. I know this, Todd, I’m done with the NFL and the NBA, I never was somebody who was obsessed with it anyway. But I just don’t have time for that. If I want to be preached to, I’ll go to church.”

Starnes has been a fierce critic of protests and recently wrote about how sports used to be, now “it’s not about the thrill of victory or the agony of defeat. It’s mostly just about agony.”

Huckabee said that he does not have to turn on a sports broadcast to have some multi-million-dollar athlete tell him the extent of his personal oppression.

“I’m just not going to listen to that,” he said. “Or some NBA player who’s selling out to China and making a fortune off of slave-labor tennis shoes, and then somehow try and tell me how sad he is for people who have been mistreated over here in America where you can become anything you want to be and the government doesn’t put you in prison for life.”

Huckabee was taking a thinly veiled swipe at the NBA’s LeBron James who was widely criticized over his comments about China while being a vocal critic of racial injustice in the U.S.

SEE IT: BIDEN’S SPOKESPERSON ASKED ABOUT TELEPROMPTER USE AND IT DOESN’T GO WELL

Starnes recalled a time in the not-so-distant past when athletes worked to unite the country. They served in the military when the country needed them and stood for the national anthem.

“You didn’t have people taking a knee or doing anything that is being done to divide this county by way of sports,” he said.

Huckabee agreed. He said sports—and entertainment to a degree—was a place that Americans can turn to in order to “escape from the pressures and problems of life, enjoy a break and maybe cheer on your team” or watch a movie.

“Now, everyone who takes the stage wants to spout off about how wrong America is and there’s some of us who just aren’t having it,” he said. “And I think it’s a growing number of people.”