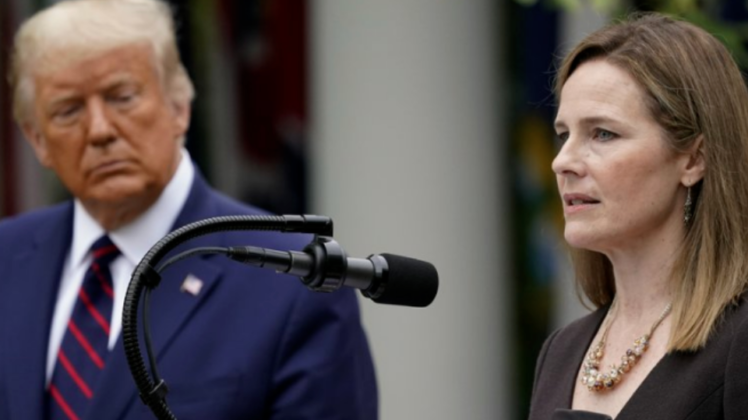 Pete Hutchinson, the president of the Landmark Legal Foundation, told the “Todd Starnes Show” on Monday that Democrats are going to have a tough time finding character flaws in Judge Amy Coney Barrett, President Trump’s pick for the Supreme Court, but they’ll surely do their best.

Trump introduced Barrett to the country over the weekend and Todd Starnes, the host of the program, said that he was impressed with her knowledge of the law and her personality.

“I thought that she just hit a home run with her remarks,” he said. “If you’re a Democrat watching, you have to be like, ‘Oh, good grief…How do you combat that?'”

Hutchinson agreed with Starnes that Barrett has a beautiful family with seven children– including two who were adopted– and is guided in her personal life by her faith.

“How on earth do you complain about them?” Hutchinson asked, referring to Barrett and her family. “But of course, we’ll hear about how she’s a nut job, religious zealot,” he said. He predicted the attacks will fall on deaf ears. He pointed out that Barrett is the oldest of a seven-child family herself and is likely no “shrinking violet.”

Starnes pointed out how Democrats on the Hill seem to take personal offense to Catholics and the religion’s “dogma” in politics.

“People of faith are now like aliens to these Democrats on Capitol Hill,” he said. “And we’re not talking about the far lefties…we’re talking about people like Sen. Dianne Feinstein and Sen. Dick Durbin.”

Hutchinson said Durbin claims to be a practicing Catholic and says he separates his faith from his public service. Hutchinson said the approach is contradictory to the religion’s teachings. He said Durbin spoke out recently about Barrett and said the Senate needs to treat her with respect, which he translated to mean “we have to trash her.”

Hutchinson said that Democrats are “besides themselves” because they know that it is “morning in America for the Supreme Court.”

“The U.S. Supreme Court, as a super-legislature, which  it’s been over the past 50, 60, 70 years…that is coming to a close, and that is wonderful news for the country.”

He called Barrett a stellar pick that brings the possibility of a colossal change on the court, and “for the better.”

Democrats appeared to be taking the same approach with Barrett as they did with Trump. They are trying to frame her selection as illegitimate and have refused to even meet with her. Hutchinson said that is not a surprise.

He said that it’s a shame that the Democratic caucus on the Judiciary Committee is so radical that they would embrace these sort of tactics that are so disrespectful, “not only to judge Barrett but to the American people.”