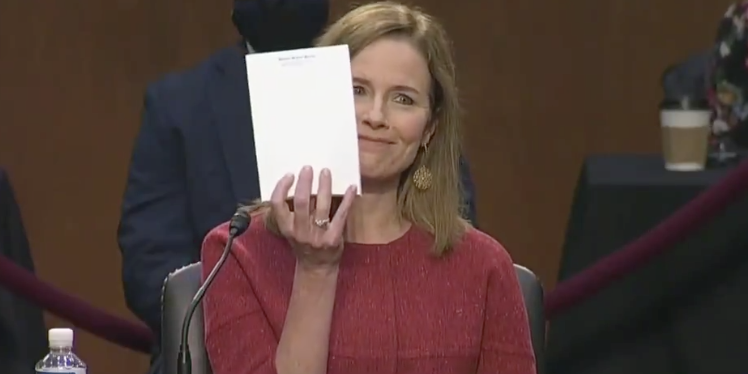 Judge Amy Coney Barrett achieved internet fame during Tuesday’s Senate confirmation hearings when she was asked by a Republican senator to show the committee her notes during the questioning and held up a blank note pad.

Sen. John Cornyn, R-Texas, the committee member, told Barrett that most senators “have multiple notebooks and notes and books, things like that in front of us. He asked her to hold up her notes, and she held up a blank note pad, with a letterhead that read, “United States Senate.”

It is not uncommon for those appearing before Senate committees to have pertinent literature and handwritten notes at their disposal. Some of the questions are specific to individual statutes that require nuanced answers.

A CNN panel even seemed to be impressed by Barrett. Dana Bash, a reporter at the network, said Barrett’s move was “impressive to Republicans and Democrats.”

John King, an anchor at the network, agreed, and said, “Let’s be honest. Number one, if we could roll back the clock, we’re not so close to the election. Number two, if we could roll back even further to another Republican president in another age—I’ve been in Washington long enough—Judge Amy Coney Barrett would be getting 70 votes or more in the United States Senate.”

The 48-year-old told the committee that she was not there to “destroy the Affordable Care Act,” which has been one of the Democrats’ favorite lines of attack.  The New York Times pointed out that she did not say if she would recuse herself form any cases that seek to overturn the law.

Mollie Hemmingway, a senior editor at the Federalist, posted a photo of a smiling Barrett holding up the blank notepad with, “LIBS OWNED. YET AGAIN,” in bold white letters. She wrote, “This is when Barrett was asked to show what notes she had brought to hearing. Senators are sitting in front of thick binders of research as they question her.”

Still, not everybody was convinced. Kathy Griffin, the comedian, posted the photo of Barrett holding up the note pad and wrote, “Judge Amy Coney Barrett holds up photo of her brain scan.”